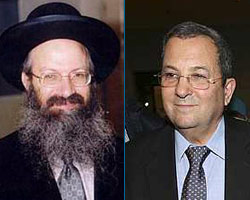 While the conflict between the Ministry of Defense and the Har Bracha Hesder Yeshiva has dropped from the media, the issue is not forgotten and military officials have informed soldiers affiliated with the yeshiva to make a decision in ten days, either to change to another hesder yeshiva or leave the hesder framework and comply with regular 36 month military service.

As a result of statements made by the rosh yeshiva Rabbi Eliezer Melamed regarding insubordination and the fight for Eretz Yisrael, Defense Minister Ehud Barak acted unilaterally, expelling Har Bracha from the hesder network, informing soldiers that may move to another hesder program and alternatively, they will find themselves among the regular IDF rank and file.

Efforts by Rabbi Chaim Druckman Shlita, who stands at the helm of the hesder network, to mend fences between Melamed and Barak failed, and the defense minister remained adamant, seemingly determined to oust Har Bracha as an example to others.

About 30 soldiers were summoned this past Tuesday, and informed they must make the decision or they will be automatically moved out of hesder.

In actuality, the directive impacts the soldiers who joined the yeshiva some time ago, those about to enter the army and those who completed their 18 months of military service. At present, all of the yeshiva’s soldiers remain adamant in their refusal to change to another yeshiva.