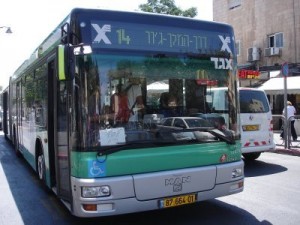 The screens at the front of Egged buses traveling from one city to another have become the target of rabbonim, who feel that they should be removed since they display inappropriate content. The screens usually display time and inform passengers of the expected time of arrival at their destination. The Vaad Mishmeres Kodesh however objects to the ads that appear on the screens between information broadcasts, leading to a demand that the bus cooperative remove them. It should be pointed out that the screens are usually on buses serving primarily non-frum routes, such as in Herzliya and areas of Tel Aviv.

It appears the decision of the vaad was made about two months but HaGaon HaRav Aaron Leib Shteinman Shlita and HaGaon HaRav Yochanan Silman Shlita objected to the move, recommending compromise and avoiding a “head-on” conflict, Kikar reports.

Prominent attorney Yaakov Weinrot was also involved, probing the legal aspect of the case for askanim. Weinrot told them the move would not stand the test of a petition to the High Court of Justice. Weinrot also warned them they are feeding the agenda of the new Shinui Party and its anti-religious agenda.

To date however, the askanim appear to be unwilling to accept the advice of Weinrot or the recommendation of gedolei yisrael shlita.