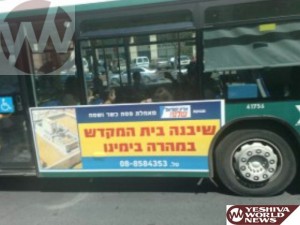 An ad campaign sponsored by the Eretz Yisrael Movement on Egged buses has been canceled by the bus company, apparently due to mounting pressure against the campaign. The campaign was launched on erev yomtov, with the adverts appearing on buses in the capital, showing a picture of the Beis HaMikdosh with the hope it will be rebuilt soon.

According to reports, the sponsors paid for ads on 200 buses around the city, including in predominately Arab areas in the eastern capital.

Sponsors lamented the bus company’s decision to succumb to Arab pressure, with pro-PA elements calling the campaign “provocative”. The sponsors advise Egged directors to open a siddur and read the text that Am Yisrael has been reciting for generations, davening for the rebuilding of the Beis HaMikdosh in our time.

The Eretz Yisrael Movement appears to be preparing to file a lawsuit against Egged. Egged officials have referred the media to the Kena’an Media Company, which is the go-between handling the ad contract.