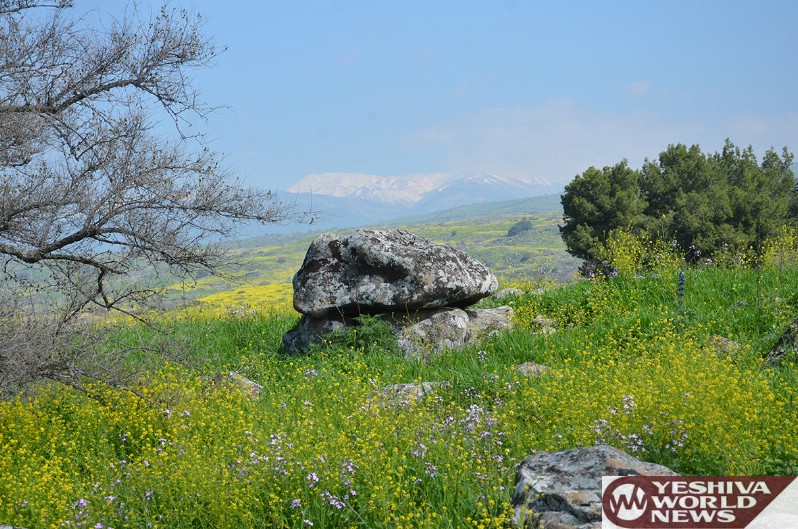 Archaeologists from Tel Hai College, the Israel Antiquities Authority and the Hebrew University of Jerusalem have recently discovered a mysterious dolmen (a large table-like stone structure) over 4,000 years old in a large field of dolmens, adjacent to Kibbutz Shamir in the Upper Galil. What makes this dolmen so unique is its huge dimensions, the structure surrounding it and most importantly the artistic decorations engraved in its ceiling. The study was published last weekend (2/3) in the scientific journal PLOS One.

The dolmen was discovered during a fortuitous visit to the site by Professor Gonen Sharon of the Galil Studies Program at the Tel Hai College. It is just one of more than 400 huge stone structures dating to the Intermediate Bronze Age (over four thousand years ago) that are located in the dolmen field around Kibbutz Shamir. When Professor Sharon entered the chamber built beneath the largest dolmen he was surprised to discover rock drawings engraved in its ceiling.

The discovery of the engravings led to a research project of the dolmen and its environs which produced new revelations concerning the dolmen phenomenon in Israel. “This is the first art ever documented in a dolmen in the Middle East”, said Uri Berger, an archaeologist with the Israel Antiquities Authority and partner in the study. “The engraved shapes depict a straight line going to the center of an arc. About fifteen such engravings were documented on the ceiling of the dolmen, spread out in a kind of arc along the ceiling. No parallels exist for these shapes in the engraved rock drawings of the Middle East, and their significance remains a mystery. The panel depicting the art was scanned in the field by the Computerized Archaeology Laboratory of the Hebrew University. By means of an innovative technique, a three-dimensional model of the engraving was produced. “The three-dimensional scan enabled us to identify engravings that otherwise could not be seen with the naked eye”, explained Professor Lior Grossman, the laboratory director.

The chamber inside the dolmen where the engravings were found on its ceiling is large, measuring 2 × 3 meters, and the stone covering it is also huge, weighing an estimated fifty tons at least! This is one of the largest stones ever used in the construction of dolmens in the Middle East. The dolmen was enclosed within an enormous stone heap (tumulus) c. 20 meters in diameter, and its stones are estimated to weigh a minimum of 400 tons. At least four smaller dolmens that were positioned at the foot of the decorated dolmen were identified inside the stone heap. In other words, what we have here is a huge monumental structure built hierarchically (with a main cell and secondary cells). This is the first time such a hierarchical dolmen has been identified in the Middle East.

The huge dolmen at Kibbutz Shamir is just one of hundreds of enormous densely scattered structures in this region. It bears witness to the existence of a significant and established governmental system in the region during the “Middle Ages” of the Bronze Age. Archaeologists tend to interpret the past based on material finds. The absence of cities, large settlements and monumental buildings attests to the collapse of the governmental and economic systems during a “dark period” in history. The dolmens tell a different story about the period – a story about a society that had a complex governmental and economic system that executed monumental engineering projects but did not leave behind any other archaeological evidence.

“The gigantic dolmen at Kibbutz Shamir is without doubt an indication of public construction”, says Professor Sharon, “that required a significant amount of manpower over a considerable period of time. During that time all of those people had to be housed and fed. The building of such a huge construction necessitated knowledge of engineering and architecture that small nomadic groups did not usually possess. And even more importantly, a strong system of government was required here that could assemble a large amount of manpower, provide for the personnel and above all direct the implementation and control of a large and lengthy project”.

Despite all this, the circumstances surrounding the construction of the dolmens, the technology involved in it and the culture of the people who built them are still one of the great mysteries of the archeology of Israel.

What is a Dolmen – A dolmen (stone table) is a megalithic structure (mega = large, lithos = stone) thousands of years old that is built of huge stones. The basic shape of the dolmen resembles a table, and most of them are surrounded by a heap of stones. Dolmens are known elsewhere in the world, from Ireland to Korea. Thousands of dolmens are scattered across the Middle East, from Turkey to Yemen. In the Golan Heights thousands of dolmens of different types were identified which are scattered in concentrations (dolmens fields) on the plateau. Although they are very common and stand out quite prominently in the landscape of ancient Israel, the mystery surrounding the dolmens’ age and their purpose have still not been resolved.

The Dolmen Field at Kibbutz Shamir– the field was first surveyed by the late Moshe Kagan in the 1950’s. More than 400 huge structures overlooking the Hula Valley were identified in the field.

7. The view from inside the dolmen. Photographic credit: Shmuel Magal, courtesy of the Israel Antiquities Authority.

8. The engravings that were exposed on the inside of the built chamber. Photographic credit: Gonen Sharon, Tel Hai College.

9. A three-dimensional model of the engravings: Computerized Archaeology Laboratory of the Hebrew University of Jerusalem.

10. Colored beads that were uncovered in the archaeological excavation inside the dolmen. Photographic credit: Shmuel Magal, courtesy of the Israel Antiquities Authority. 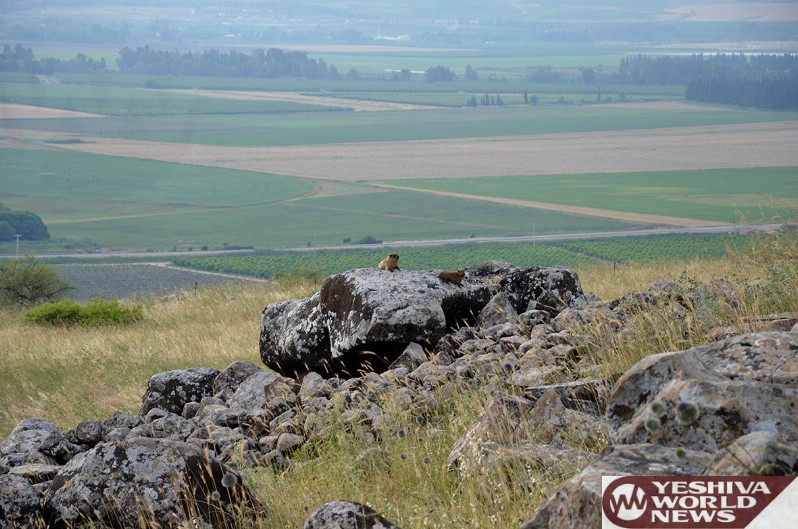 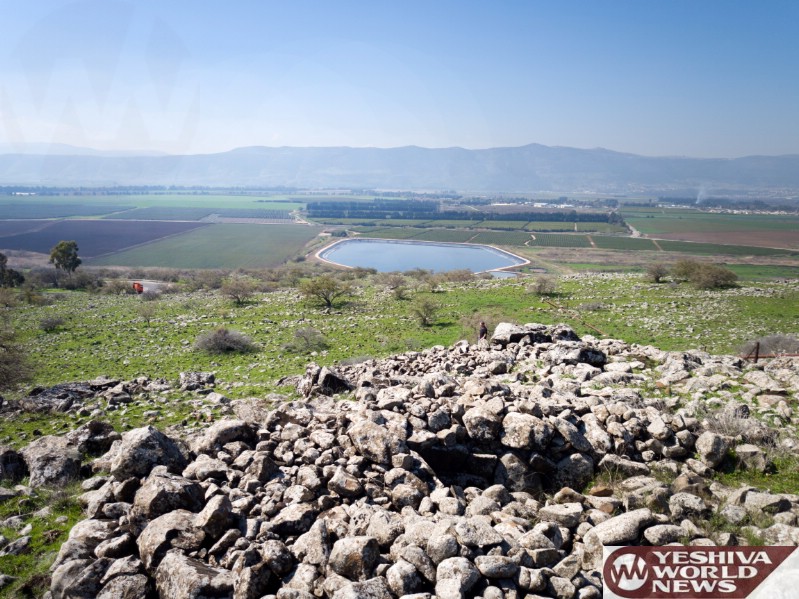 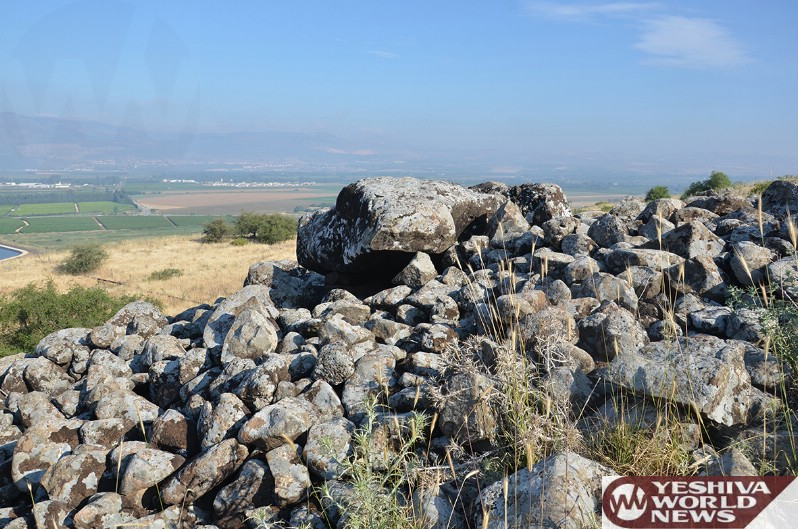 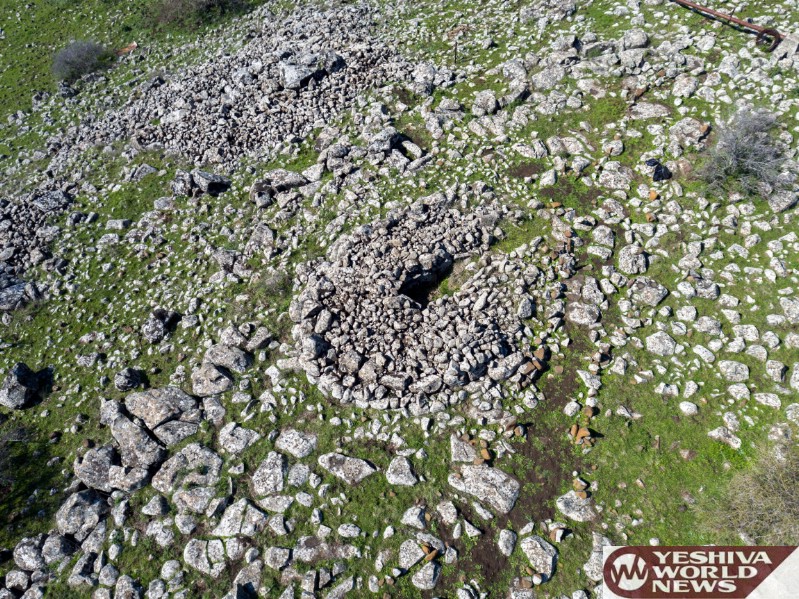 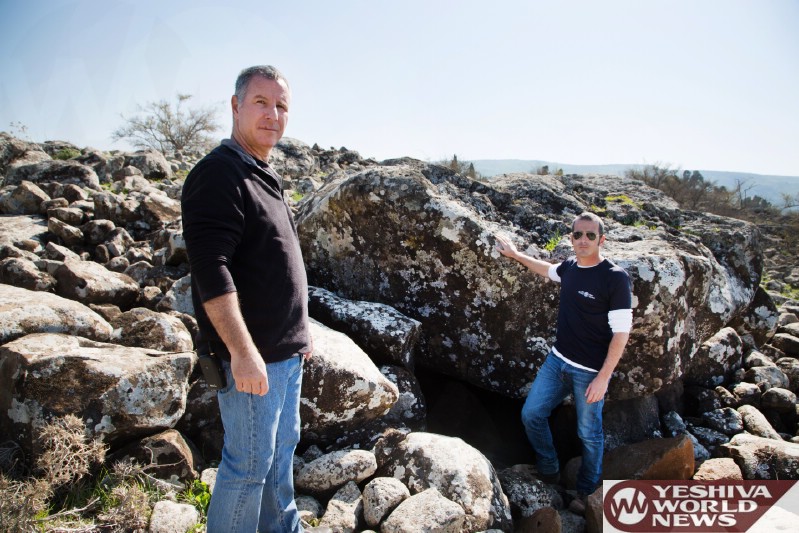 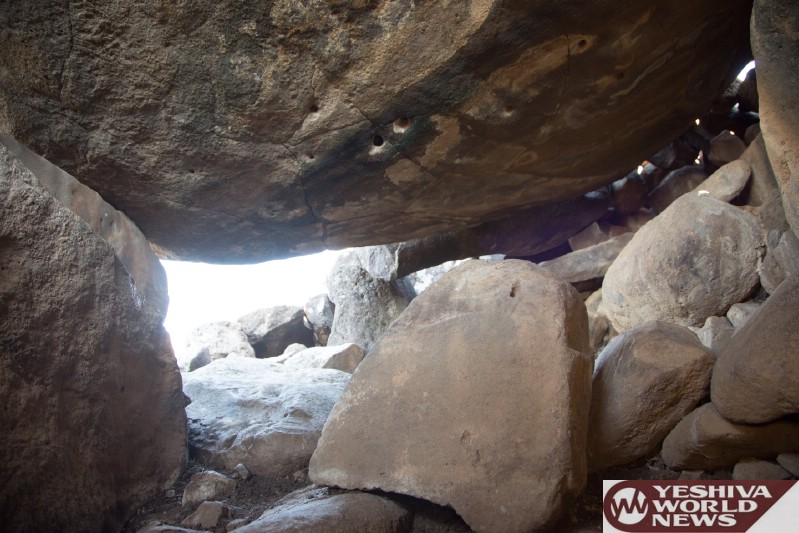 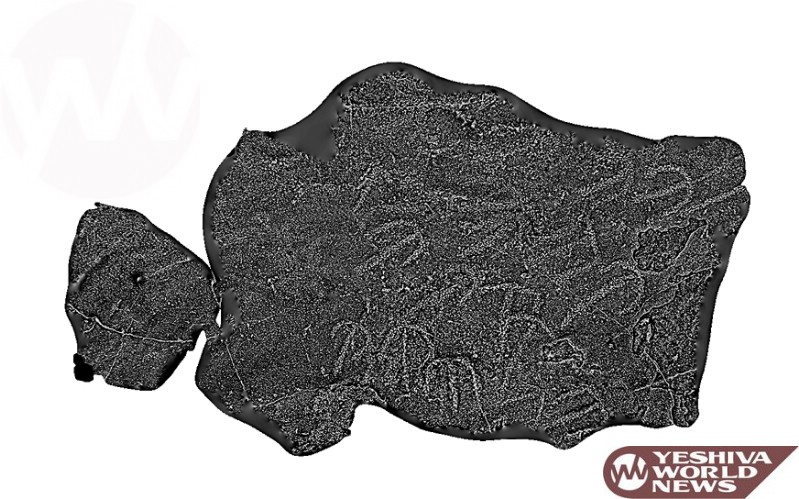