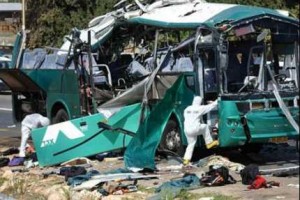 Mrs. Tzvia Turbolo, the mother of Alexander, one of the suspects arrested last week for destroying a Jerusalem memorial to victims of an 18 bus suicide bombing attack does not see a reason to apologize. She actually defends the act. She explained that a memorial statue is simply “idolatry” Kikar Shabbos reports.

YWN-Israel reported that a number of yidden affiliated with Neturei Karta were arrested after a police patrol spotted them destroying the memorial.

Speaking with Yediot Yerushalayim, Mrs. Turbolo stated she was aware he was in that area before shabbos was out, taking part in a protest against Egged, adding that on his way back, he was arrested, indicating perhaps he was not responsible but was with others who allegedly destroyed the memorial.

She stated that at the end of the day, she does not see the act as being “so terrible” to warrant an apology. She feels they were hoping to “open people’s eyes” by offending them, since “these things are against the Torah”.

When asked about the feelings of the families whose loved one’s perished in the suicide bombing attack, she explained “many things are bothersome in the state. We must realize the state is not a Torah observant entity and we must get people to understand there so they realize what should be”.

She was then asked regarding the tearing of Israeli flags in the area on cars and buildings ahead of Independence Day.

“If they are symbols of the state, why not? These are symbols of avoda zara but I am not a posek. If my child comes and tell me he tore a flag I will not say or do anything, even if we are talking about privately owned flags”.