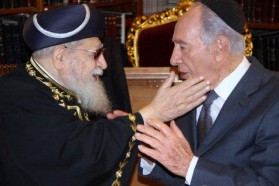 The rav explains that “perhaps one can understand the words of the person who released the baseless accusation, seeking to assist his client” but he went on to lash out at the media, explaining we have become “Sodom and Gomorra, where any statement released by any fool makes its way to the headlines”.

The rav went on to explain there is no filtering and no responsibility, as if “we have become a society that pulls along any trash that fools release publically. We are not compelled to respond to every foolish statement, and this accusation is not worthy of a response”.