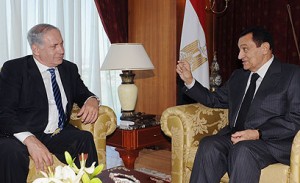 Prime Minister Binyamin Netanyahu met in Sharm el-Sheikh with Egyptian President Hosni Mubarak ahead of this week’s scheduled launching of ‘proximity talks’ between Israel and the PA (Palestinian Authority), talks that will be mediated by United States special Mideast envoy George Mitchell.

According to officials on Mr. Netanyahu’s staff, the meeting was held in a “positive and constructive atmosphere”, with the two leaders discussing matters pertaining to the resumption of diplomatic dialogue, albeit indirectly. The prime minister was accompanied by Minister of Industry & Trade Binyamin Ben-Eliezer, an Arabic speaker but more importantly, one who maintains a very friendly relationship with the Egyptian leader.

Ben-Eliezer released statements that there is no doubt as to Egypt’s commitment to regional peace and jumpstarting the process between Israel and the PA. He adds that Egypt plays a pivotal role in the peace-making efforts.

Following the meeting with the state leaders, Ben-Eliezer met with Suleiman and Aboul Gheit and they discussed efforts to obtain the release of Gilad Shalit, who at the end of June will mark his fourth year in Hamas captivity in Gaza.

While Egypt is pressuring the White House to promote a regional nuclear non-proliferation agenda targeting Iran, Israel and Turkey, Cairo does remain Israel’s strongest and most reliable neighboring ally.

While the Egyptian leader’s motives may not necessarily be to assist Israel, Cairo’s fears of the growing Hizbullah/Iranian influence in Egypt, accompanied by the Hamas connection, has compelled Mubarak to step-up anti-smuggling efforts along the Rafiach border to Hamas-controlled Gaza. Tensions are on the rise between the Hamas regimes and Cairo, with the latter recently accusing Egyptian security forces of introducing poisonous gas into a smuggling tunnel that collapsed, claiming at least four lives. Egyptian officials denied the allegations.