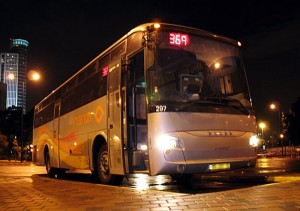 The Metropolin (Metropolis) Company beginning on Monday will take over for Egged and Dan, providing public bus service to a number of cities; Ra’anana, Kfar Saba and Herzliya. These lines were previously run by the Dan Company. Metropolin won the tender from the Ministry of Transportation for these routes and the inter-city routes connecting these areas and Gush Dan to Tel Aviv. The package also includes a line serving Ramat HaSharon.

The company during the coming months will also take over the lines operated in the above-mentioned cities by Egged.

HaMevaser reports that Transportation Minister Yisrael Katz is optimistic, explaining the entry of Metropolin will increase bus service in those areas by 40%, adding this is the largest tender ever given to a company since the reform, turning lines over to private firms, taking them away from Dan and Egged.

The company has acquired 250 new buses, some of which offering free WiFi to riders as was reported by YWN-Israel.