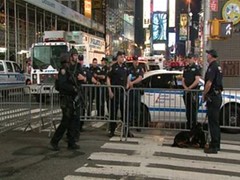 The failed car bombing in Times Square increasingly appears to have been coordinated by more than one person in a plot with international links, Obama administration officials said Tuesday.

The disclosure, while tentative, came as the White House intensified its focus on the Saturday incident in New York City, in which explosives inside a Nissan Pathfinder were set ablaze but failed to detonate at the tourist-crowded corner of Broadway and 45th Street.

Emerging from a series of briefings, several officials said it was premature to rule out any motive but said the sweeping, multi-state investigation was turning up new clues.

Separately, White House spokesman Robert Gibbs also characterized the incident for the first time as an attempted act of terrorism. “I would say that was intended to terrorize, and I would say that whomever did that would be categorized as a terrorist,” Gibbs said, sharpening the administration’s tone.

Another U.S. official, recounting a conversation with intelligence officials, said, “Don’t be surprised if you find a foreign nexus. . . . They’re looking at some tell-tale signs and they’re saying it’s pointing in that direction.”

Officials cautioned that even if the investigation points toward an international link, rather than domestic or anti-government groups, that does not mean al-Qaeda or another terrorist organization is necessarily involved.

The emerging picture came as police and federal investigators searched for a man in his 40s whom surveillance cameras caught changing his shirt in an alley and looking over his shoulder near where the car was parked about 6:30 p.m., and another person seen running north on Broadway from the area. New York City Police Commissioner Raymond Kelly also said detectives had spoken with the registered owner of the car but revealed no details other than that the man was not a suspect.

Police said the bomb would have created a fireball that likely would have killed or wounded many people, making it the most serious bombing attempt in the United States since the Christmas Day incident aboard a commercial flight bound for Detroit. The investigation has focused on whether an organized group or a determined individual was responsible.

The Taliban in Pakistan claimed responsibility in a video posted on YouTube, but Kelly and federal investigators said Sunday that no evidence had surfaced linking the group to the bomb.

On Sunday night, a second video was posted by apparent representatives of the Taliban, showing the group’s commander, Hakimullah Mehsud, promising to launch attacks in the United States.

Mehsud, who U.S. and Pakistan authorities initially believed was killed in January drone strike, was recorded saying, “The time is very near when our fedayeen will attack the American states in their major cities . . . in some days or a month’s time.”