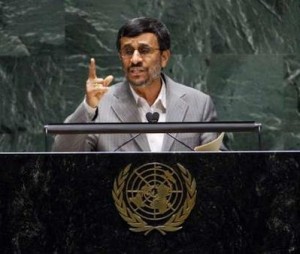 Giving the evil an international podium permits Iranian President Mahmoud Ahmadinejad a platform to air his diatribe around the world and that is exactly what he did, addressing the United Nations nuclear non-proliferation gathering, lashing out at the United States and Israel.

In his address in UN headquarters in NYC, Ahmadinejad accused the United States of “war crimes” and posing a threat to a world seeking to live in peace and eliminate nuclear weapons, the Iranian leader brazenly defended his nuclear program, which he insists is for peaceful means, but the United States, Israel and other countries are of course stockpiling nuclear weapons as weapons of mass destruction, intended for use against mankind, to snuff out human life, unlike Tehran’s noble research, medical and scientific goals. He called the nuclear weapons stored for military purposes “a fire against humanity”.

He did not forget Israel, speaking of how the “Zionist regime” has been stockpiling nuclear weapons, enjoying American support for its actions. He spoke of how the Zionist regime poses a threat to the entire Mideast region.

Not stopping there, the leader of the Axis of Evil called upon the United Nations to oust the United States off the International Atomic Energy Agency, demanding that the international body’s Security Council be restricted to reflect the necessary changes.

Delegates from the United States, the United Kingdom and France stood up and exited, boycotting the Iranian leader’s address.

US Secretary of State Hillary Clinton stated Ahmadinejad will not be permitted to turn around the truth, adding “So we’re not going to permit Iran to try to change the story from their failure to comply and in any way upset the efforts we are in the midst of, which is to get the international community to adopt a strong security council resolution that further isolates them and imposes consequences for their behavior.”

United Nations Secretary-General Bank Ki-Moon was not outdone, calling on the Iranian leader to prove to the world that his nuclear program is indeed for peaceful purposes.

The remainder of the four-day conference will most likely be less eventful, lacking the color of the Iranian leader’s address. Ahmadinejad is the only head of state in attendance, and the participants hope to draft a nuclear nonproliferation document during the remaining days of the gathering.

Unfortunately, many are mocking his words, but in truth, he represents a growing threat and his words are not those of a madman, but that of a leader determined to bring death and destruction to countries that negate is Islamic fundamentalist beliefs. Ahmadinejad stands at the helm of the ‘Axis of Evil’, choreographing terrorism via his Syria and Lebanon, which today serves as a base for the growing Hizbullah threat, working in tandem with the Hamas regime in Gaza.

The conference, which is held once in five years, is aimed at seeking ways to reduce the world’s stockpile of nuclear weaponry. It is based on the 1970 NPT (Nuclear Non-Proliferation Treaty) which was signed by 189 nations.

YWN VIDEO LINK: Click HERE for video from the UN.