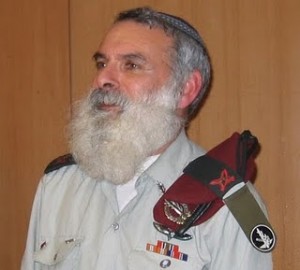 In another week IDF Chief Rabbi Brigadier-General Avichai Ronsky will step down and return to civilian life, perhaps to his yeshiva. The 60-year-old rav has indeed left his mark, exhibiting a new image for the military’s top chaplain, one who is combat ready and experienced, and one who prefers to stir the pot rather than accept the traditional back seat role of religion in the military.

In the past, rabbonim in the IDF served primarily as mashgichim, but Ronsky has created a new role, a combat rabbi if you will, one who is in the field alongside troops, addressing the halachic intricacies of being a combat soldier while adhering to Torah Law. During his tenure, the members of the IDF Chief Rabbinate left their desks and kitchens, sent to the front, as was the case during Operation Cast Lead, seeking to encourage and support the fighting forces, as well as addressing the halachic realities of the battlefield. He worked to create a connection between field soldiers and rabbonim, not necessarily only reaching out to shomer shabbat soldiers, but all soldiers.

Speaking to the media, the outgoing rav was asked many questions, one regarding the years of service during which he was a constant target for the Haaretz newspaper. He explained that the majority of the readers of Haaretz do not serve in combat units, not in the standing or reserve duty army, and therefore, his philosophy and actions are troublesome to the newspaper’s line.

Regarding the significant presence of the dati leumi soldiers and officers, he acknowledge a refusal to adhere to orders is indeed problematic and worrisome, but points out this represents a very small number of soldiers. He admits the number of ‘refusnik’ soldiers has increased, but he is not concerned, pointing out “we were put to the test and we saw there was adherence to orders”.

When asked by ‘News 1’ if he is pleased with the fact that the kipot srugot represent a growing number of officers, Rav Ronsky surprisingly stated “no”, that this is upsetting since he feels the army should represent a cross-section of the population. “The army has undergone a revolution and it is no longer the army I remember. I visit the combat units and see the new immigrants from Ethiopia, Russia, the religious and the residents of border areas. Generally speaking, the inductees from Tel Aviv do not go to elite combat units, but to the Intelligence Corps”.

Rabbi Ronsky will be replaced by Rabbi Rafi Peretz, the rosh yeshiva of the Atzmona IDF Prepatory Yeshiva expelled in the 2005 Gaza expulsion. An IAF helicopter pilot, he is remembered for embracing and hugging security forces who came to oust him and his talmidim, and the secular press enjoys billing him as the first IDF chief rabbi without a beard.