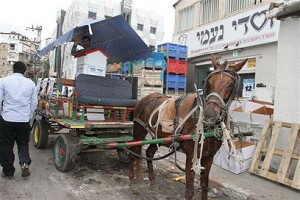 Members of the Chasdei Naomi organization, which provides food to the needy, decided to protest the recent gas price hikes by replacing the cars normally used for their weekly meal distribution with horse-drawn carriages this past Tuesday.

Volunteers loaded the food unto five carriages and delivered them to families living in the central Israeli Gush Dan region – at minimal cost and without the need to stop to refuel.

The Charedi organization explained that this was as much a demonstration of protest as it was a way to cut operational costs.

A modest nationwide movement opposing the government’s decision to hike gas prices originated on Facebook in recent weeks; In January, a couple of protest convoys of cars made their way to the Finance Ministry in Jerusalem, blocking traffic and drawing the attention of a few politicians and organizations. The movement announced Tuesdays as fuel-free days.

“Last year the public didn’t try to fight the hike, and now gas prices have reached new heights,” Chasdei Naomi Director Moshe Cohen said. “Many car owners cannot bear it. The gas expense is especially high for the organization, which transports thousands of food packages to families around the country every day.”