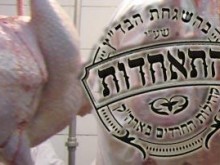 Just three years after announcing itself as a new mehadrin hechsher in the Israeli marketplace, the Hisachdus shechita is out of business. The hashgacha was launched on 21 Menachem Av 5769, seeking to provide an umbrella shechita for the chassidish community. It was to have replaced the poultry shechita of Badatz Agudas Yisrael, Belz, and unite other chassidish shechitahs, all willing to shut down and join the new conglomeration towards lowering prices.

The beginning was a difficult one, primarily due to marketing issues and the politics that surround the lucrative mehadrin marketplace as well as issues of chumras (stringencies) demanded by Sanzer rabbonim shlita that were not in line with the Agudah and Belz shechitahs.

At about the same time Kehillos arrived on the scene, with the latter not facing the marketing issues, hence appearing in more supermarkets at lower prices, rapidly grabbing up a fair share of the chareidi marketplace at the expense of Belz and Agudah. Alternatively, some consumers who would have relied on Hisachdus turned to Eida Chareidis and Rav Landau as Hisachdus was not available in their area and they opted not to use Kehillos.

Marketing and distribution issues continued to plague Hisachdus and now, three years after its grand entrance into the marketplace it has officially closed its doors.

Belz has now approved Kehillos and moved over rather than restart its own independent operation, realizing it was less costly for community. Agudas Yisrael remained the lone player and it failed to keep the operation afloat.

With the new agreement in place, new wrappers will begin appearing on chickens marketed under the Kehillos name which include the seal of the Badatz Machzikei Hadas hashgacha under the Belzer Rebbe Shlita.