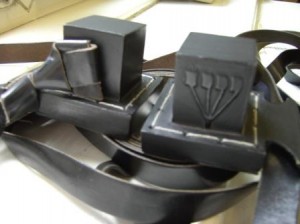 The recent scandal concerning peeling Tefillin straps has uncovered a fascinating debate between Rav Landau of Bnei Brak and the Eida Chareidis Poskim about the ideal way to color the Tefillin straps in the first place. It is not an innocuous debate either – as each side has serious concerns about the Kashrus of the other.

Without burdening the readers with too much detail, there are three halachos that must be known:

1] Tefillin straps themselves must be colored – not a paste that lies on top of the strap.

2] The coloring must be done by human power and not gravity power.

3] Once something was colored incorrectly, it cannot be covered up with correctly made coloring. Rather it must be sanded down and redone.

Rav Landau of Bnei Brak investigated the method of Tefillin strap dyeing some fifteen years ago and concluded that the chemicals used create a paste layer that lies on top of the strap. He felt that the leather itself was not being colored – only the paste was. He therefore conceived of a new method of dyeing the strap – by adding a black color to the chemical that creats the paste. The Lubavitcher Rebbe approved of Rav Landau’s position completely.

The Eida Chareidis brought Rav Landau’s suggestion to both Rav Meir Bransdorfer zt”l and Dayan Fisher zt”l. They both concluded that the way that the chemical spreads over the leather, even with the black paint added, spreads too quickly to be considered Koach Gavrah (human power) upon application. They discouraged this method.

How do they get around Rav Landau’s concern? They ruled that the application of the chemical at the time of application only hardens later, and is considered “ain bo mamashus” – something that does not have significance.

The debate between Eida Chareidis straps and Rav Landau straps is something that, in this author’s opinion, should be something that American Poskim should look into. The possibility of dropping the use of the chemical entirely should also be looked into. The downside of this is that the black paint will crack more often and not be as shiny or smooth. However, even though the straps will no longer appear shiny and will look “as if they are used Tefillin straps” – this may be the preferable way to proceed.