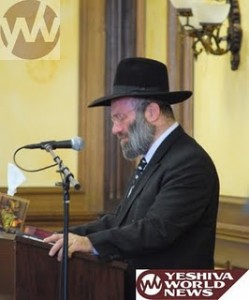 As a Rov of a Kehillah, I generally refrain from disseminating a halachic issue, which should be discussed in the Bais Medrash with the sole purpose of Asukay Shmaatzah Alibah D’Hilchoso, on the internet.  However, since the issue involves the Kavod of Gedolei Yisroel and there is much confusion being reported, I feel it is necessary to clarify a few points. Before sending this clarification, I asked Rav Aryeh Elyashiv to ask HoRav Elyashiv Shlit”a whether I should send this out to correct the erroneous quotes in HoRav Elyashiv Shlit”a‘s name and in the name of HoRav Wozner Shlit”a. He said that his grandfather Shlit”a responded unequivocally that I should.

Klal Yisroel owes a debt of gratitude to Rav Moshe Vaie Shlita for bringing attention to the issue of worms in fruits and vegetables. He is a genuine Talmid Chachom, a Yarei Shamayim, and one of the foremost experts on the subject.

Rav Vaye was not refused entry to Rav Elyashiv Shlit”a. He was actually called and told by Rav Elyashiv Shlit”a to retract what he had said in his name in the past regarding this issue because it does not accurately reflect Rav Elyashiv’s position. He did in fact retract, to a degree, in private. The original letter was sent by email to all Kashrus organizations. The retraction, unfortunately, was not.

I feel an obligation to make this Machoah for Kovod HaTorah.