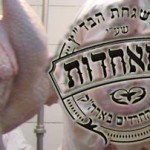 This new hechsher, which is up-and-running today, is the result of months and months of planning, the result of joint efforts by many of the Chassidic Courts in Israel.

The shechita was performed in Mishur Adumim, and the first chickens are expected to be seen in chareidi areas tomorrow, Wednesday, June 9th. The first shipment was sent to Laniado Hospital in Netanya, where patients and staff will be the first group enjoying the latest member of the Israel kashrus market.

YWN-ISRAEL announced the planned hechsher in November of last year.

At that time, is was reported that chassidic courts cooperating in the venture include Belz, Karlin, Slonim, Sanz, Erlau, Breslov and Seret Vishnitz.