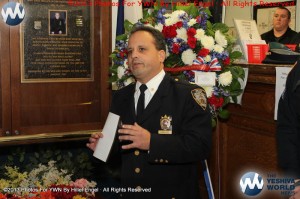 Officer Frank Hennessy suffered a fatal brain aneurysm while responding to a man with a gun call at the intersection of Flatbush Avenue and Farragut Road, in Brooklyn.

As the patrol car he was riding in approached the intersection, he observed a man matching the suspect’s description. He collapsed as he jumped out of the patrol car to confront the man.

Other officers at the scene immediately started CPR. Officer Hennessy was transported to Kings County Hospital, and then transferred to Downstate Medical Center, where he died the following day.

Officer Hennessy had served with the New York City Police Department for 8 years, and was assigned to the 70th Precinct. He is survived by his wife and two daughters.