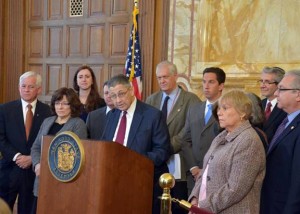 “I am proud to co-sponsor a bill that will not only strengthen our domestic insurance companies, but help protect our citizens against an Iranian regime from achieving nuclear weapons,” said Assemblyman Phil Goldfeder. “We must protect our families and make sure they are not unintentionally put in harms way by ensuring our investments overseas are financially sound.”

“It is unacceptable for insurance companies to be making investments and profiting from business partnerships that support a nuclear Iran,” said Assemblywoman Nily Rozic, the first Israeli born member of the New York State Legislature. “This legislation would ensure that investments made by companies are sound public policy that will protect our families in Queens, and improve national security for all Americans and all New Yorkers.”

Additionally, this bill would guarantee that investments made by domestic insurance companies in the Iranian energy sector are non-admitted assets. Meaning, insurers would be required to determine what investments, transfers, or other transactions have been made with companies that invest in the Iranian energy sector. As of March 1, 2014, insurers would be required to provide the Department of Financial Services with the list of such investments and transactions.

“While I hope this legislation further encourages divestment in Iran, it is my primary purpose to protect policyholders by making certain that the investments of our domestic insurers are financially sound,” said Sheldon Silver, Speaker of the Assembly. “Investments in a nation as volatile as Iran, a nation that is developing nuclear weapons and has threatened to use them against Israel and the West, a nation that brutally oppresses its own people, a nation that sponsors terrorism worldwide, should never be considered a sound investment.”

The Iran Divestment Act, sponsored by Speaker Silver and signed into law last year, authorizes New York State to procure practices of the federal government and slow down the development of nuclear weapons in Iran. The State Office of General Services (OGS) will be required to create a public list of individuals or companies that invest an excess of $20 million in goods, services or credit in the Iranian energy sector. Further, entities on the list are prohibited from entering into or renewing contracts with New York State and local governments.

The Iran Divestment Act is similar to legislation in California. Laws with the same purpose are in effect in Florida, Maryland, Indiana and have been introduced in several other neighboring states, including Connecticut and New Jersey.