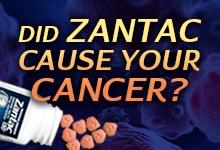 (Lansing MI) Rachel exercised regularly, maintained a healthy diet, and had no family history of cancer. But she still got breast cancer and she still died. Rachel’s family and Rachel’s doctors were at a complete loss. It wasn’t until the news about Zantac’s link to cancer swept across the world that it all made sense: it appears that Zantac caused Rachel’s cancer.

Before Rachel passed away, she started researching Zantac’s connection to cancer and what she unearthed was astounding. Valisure, a Connecticut-based laboratory, discovered that Zantac turns into the extremely potent, cancer-causing carcinogen, N-nitrosodimethylamine (“NDMA”) within the body. This carcinogen, which was originally used for rocket fuel, is so potent that its only practical purpose today is to induce tumors in laboratory animals to study cancer!

Even some of the most conservative testing protocols, such as the testing performed by Emery Pharma which did not show as much NDMA as Valisure’s testing, still generated enough NDMA that just one 150mg tablet of Zantac has at least as much carcinogenic impact on the human body as smoking 30 PACKS OF CIGARETTES.

Quickly, Rachel discovered compelling and disturbing scientific evidence linking Zantac use with breast cancer and other cancers. Rachel found the recent article discussing a lawsuit filed in Florida by Jill Goldstein against the makers of Zantac alleging that Zantac caused her breast cancer. Jill’s attorneys, Levin Citron Rodal, PLLC stated, “If only the makers of Zantac had put aside their greed and heeded the 2008 peer-reviewed study by the Fred Hutchinson Cancer Research Center, Jill Goldstein would not be going through the hell she is subjected to now.”

Clearly infuriated by what she discovered, Rachel started looking for an attorney to see if there was a way she could be helped.  After a brief google search, Rachel discovered Levin Citron Rodal, PLLC (“LCR”), the law firm that filed the nation’s first case for Zantac related cancer as well as Jill Goldstein’s attorneys. Interestingly, the first case filed by LCR involved a breast cancer patient as well.

Very soon after LCR filed the first lawsuit, many makers of Zantac and ranitidine issued a voluntary recall and suspended shipments to pharmacies and drug stores. But it was too little too late for Rachel and for millions of other Americans. Zantac, which is one of the most popular and frequently prescribed medications in the world (approximately15 million people per year in the U.S. take Zantac on a regular basis) had already been ingested by millions of people for years.

As Rachel’s family mourns the loss of their beloved family member, authorities and scientists are discovering even greater concern with the vastness of NDMA exposure people received from ingesting Zantac/Ranitidine including its link to birth defects, miscarriages, infant deaths, and other cancers.

Questions about how Zantac can turn into the cancer-causing NDMA, how the FDA and drug manufacturers allowed this to happen, and why didn’t the manufacturers warn the public of this danger are just some of the issues that will be addressed in Rachel’s case and many others. If you or someone you know has taken Zantac or ranitidine, you may want to consider contacting a law firm to find out if you have a case. To see if the law office of Levin Citron Rodal, PLLC can help you, go to www.ZantacCancer.com and fill out a brief survey. A lawyer will then contact you and let you know if you may be entitled to compensation.