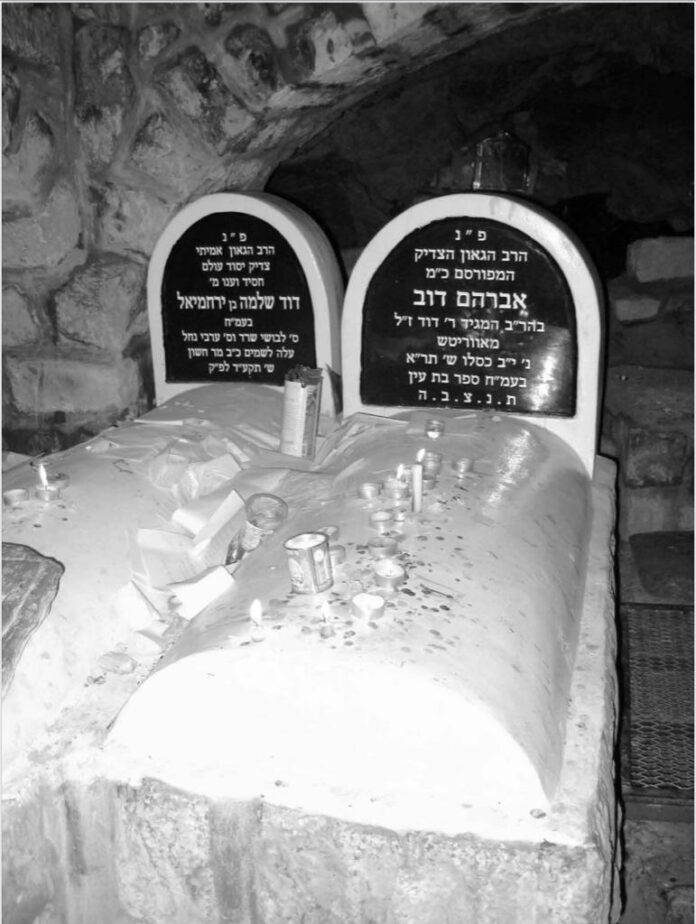 The Bas Ayin, Harav Avraham Dov Ber of Ovritch was born in 5525/1765 in the Ukrainian town of Chmielnik. He married the daughter of the Rabbi of Ovritch and settled there. He would later take over the position as Rabbi of Ovritch, where he would remain for nearly forty years.

He is counted as one of the great disciples of Harav Nachum of Chernobyl,  the מאור עינים z”l, and of R’ Levi Yitzchok of Barditchev, the קדושת לוי, and was affiliated with many other Tzadikim of his generation.

At the advanced age of 70, the BAS AYIN made the heroic decision to move to ארץ .ישראל  Upon his arrival, the Chassidim in Tzfas appointed him as their spiritual leader and guide, a role he would remain in for the remainder of his years.

There is a lot written about in his life in ארץ הקודש, where the Rebbe’s self-sacrifice for the entire קהילה of Tzfas was so recognizable. The Rebbe did not differentiate between חסידים / מתנגדים / ספרדים  and treated every one alike. The Bas Ayin fostered a peaceful atmosphere in Tzfas alongside הגאון הצדיק ר’ ישראל משאקלאוו  who was the leader of the תלמידי הגר”א.

In a well known incident, the Bas Ayin is venerated for saving the community of Tzfas from complete annihilation during the deadly earthquake which occurred on the 24th of Tevet, 5597 (January 1, 1837). The earthquake was responsible for 5,000 people losing their lives, which was at that time more than 80% of the community. The earthquake happened between the afternoon and evening prayers, while most of the men were in shul, when suddenly they all felt the tremors and rumblings. Of all the shuls in Tzfas only two remained standing (Ari-Sephardi and Abuhav), and many hundreds of Jews at prayer perished under the collapsing debris. In the shul of the Bas Ayin as elsewhere, panic set in, and the congregants began to bolt for the doors.

“Come to the ארון הקודש if you wish to be saved!,” called out the Bas Ayin and Immediately everyone crowded around him. The Bas Ayin threw himself on the ground, praying and weeping. And here was the miracle, although most of the shul did collapse, the area where the Rabbe and his congregants were clustered remained standing and everyone there was saved. As of today, the line between the original structure (near the Ark) and the reconstructed portion is clearly visible. One source (Eden Zion) states that while nearly all the walls collapsed, the domed ceiling miraculously remained aloft, almost as if it were suspended in the air!

The Bas Ayin was niftar on the 12th of Kislev, 5601/1840 and the plague immediately stopped. He was buried in a me’arah alongside other great Chassidic leaders, such as the ערבי נחל  and not far from the kevarim of the Beis Yosef and the Alshich. . His kever in Tzfas is noted as a place of prayer for those in need of yeshuos. Thousands of Yidden come every year to his yartzeit and many stories are told of miracles that have come as a result.

The holy sefer בת עין has been reprinted several times, but each subsequent edition carried with it the typos and errors that crept into each of the printings. About fifteen years ago, Rabbi Yisrael Mendelovits was motivated by the Rabbe of Tosh to revise and republish the sefer in the intended form. As Rabbi Mendelovits remarked, it was solely סייעתא דשמיא  that as soon as he began his holy work many manuscripts was discovered enabling him to edit the entire sefer, consolidate the earlier prints, and publish it with the correct text. Now, Rabbi Mendelovits is working on publishing an English version of the Sefer which is very close to being completed.

It is well known that the reprinting of a sefer is a great benefit for the author, but even more so for those who participate in that project. This is especially true of the righteous who did not leave behind any children that their work is their legacy and they will look out for the well being of those who do them this favor.

While the English edition is close to completion there is still much to do and financial support is imperative. Can you imagine how fortunate the opportunity to be a partner with the Rebbe? The Rebbe considered this work to be the fruit of his labor, in some ways like his own child, as the Rebbe so often quoted from our Sages, תולדותיהם של צדיקים הם מעשים טובים.

By answering this call you are answering the Rebbe’s plea and fulfilling his will. This moment provides a unique opportunity to participate in this incredible mitzvah You can donate or make a dedication and merit the mitzvah and its immeasurable reward. To donate CLICK HERE

Zechuso yagen aleinu. May his memory be a source of protection for us all.