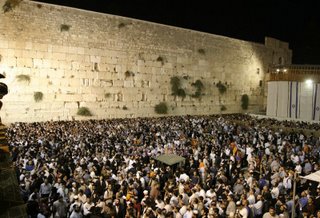 A routine check of the stones of the Western Wall was carried out yesterday. Archaeologist Dan Bahat and engineerYossi Gordon oversaw the work. In addition, the thousands of notes and prayers wedged in between the stones were collected and removed, as they are done twice a year.Also in Jerusalem, the city’s neighborhood rabbis were authorized yesterday to sell the city’s chametz – leavened products that are not allowed to be eaten or owned by Jews during the upcoming Passover holiday. Jerusalem Mayor Uri Lupoliansky and several neighborhood rabbis visited the home of leading sage Rabbi Yosef Shalom Elyashiv, and the mayor gave them the authorization. Rabbi Elyashiv said that city residents should sell their chametz only via neighborhood rabbis.Because of the expected onslalught of visitors to the capital during the Passover holiday, private vehicles will not be allowed to enter the Old City from April 14 until April 18. Shuttles will be provided from the Supreme Court building and the Central Bus Station, and public bus service to the Old City will be stepped up.