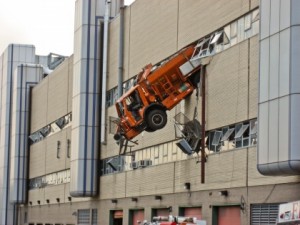 [VIDEO IN EXTENDED ARTICLE] The driver of a New York City Department of Sanitation truck is in stable condition following a frightening accident at a Queens depot.

The vehicle, a salt spreader, crashed through the wall and windows of the second floor of the depot shortly after 9 a.m. Wednesday and dangled precariously above a group of parked cars.

The incident took place at the depot on 53rd Avenue just east of 58th Street.

The fire department used towers and buckets to rescue the 56-year-old mechanic, identified as Robert Legalle, a 10-year veteran of the department. He was transported to Elmhurst Hospital for treatment.

Officials said Legalle was pulling the salt spreader into a repair bay when the truck kept going smashing through the wall.

Crews are continuing to remove the 16-ton truck.