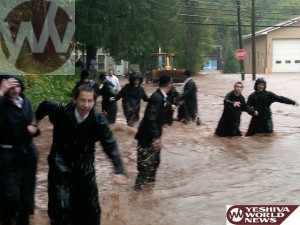 YWN has some new video and photos of the horror in Fleischmanns, where Leah Stern A”H was R”L killed.

Tropical Storm Irene has made its mark on the Southern Tier, causing widespread flooding throughout the area.

The Delaware County Sheriff’s office says she was killed after while staying in a motel in Fleischmanns. Flood waters reportedly caused the Valkyrian Motel to partially collapse. She was later found dead by rescue teams.

The Fleishmanns area, along with the towns of Middletown and Roxbury were all among the hardest hit by flooding.

Emergency crews spent the day rescuing people from their homes, using boats and helicopters in the effort and the threat is not over yet. Officials say the situation is still very serious and evacuations are in effect.

To watch this video from a mobile device, click HERE.