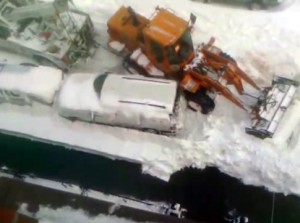 Probably one of the best videos from the Bloomberg Blizzard in 2010 was the footage of some NYC Sanitation Workers destroying a Ford Explorer while trying to free a snowbound front-loader in Brooklyn Heights.

The tug of war against the snow ended with the front end loader smashing – over and over – into the parked SUV.

The reactions from the person filiming the scene tells it all.

The video has been edited by YWN to remove any foul language.