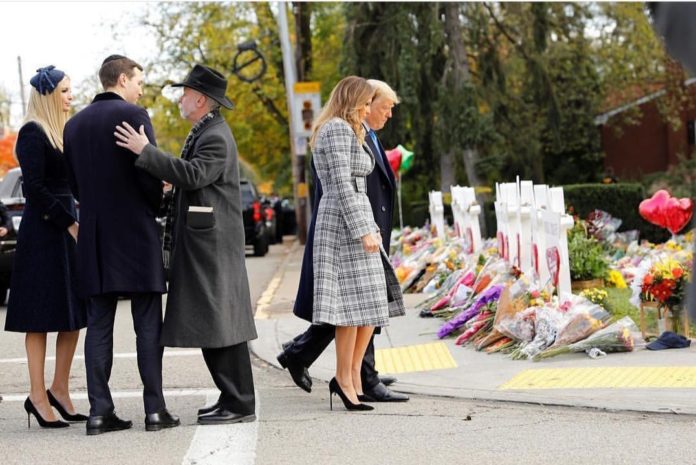 Pittsburgh’s Jewish community began burying its dead Tuesday after the horrific massacre at a synagogue on Shabbos, holding funerals for a beloved family doctor, a pillar of the congregation, and two 50-something brothers known as the Rosenthal “boys.”

President Donald Trump and first lady Melania Trump paid solemn tribute Tuesday to each of the 11 people slain in the worst instance of anti-Semitic violence in American history. As the Trumps placed their remembrances outside the Tree of Life synagogue, protesters nearby shouted that the president was not welcome.

The Trumps first went inside the vestibule of the synagogue, where they lit candles for each victim before stepping outside. It was a marker of the political divisions roiling the nation in the aftermath of the Shabbos shooting that shouts of “Words matter!” and “Trump, go home!” could be heard from demonstrators gathered not far from where a gunman had opened fire on Saturday.

Rabbi Jeffrey Myers, who had been conducting services when the shots rang out, led the first couple outside and gestured at white Jewish stars posted for each victim. At each, the president placed a stone, a Jewish burial tradition, while the first lady added a flower. They were trailed by first daughter Ivanka Trump and son-in-law, Jared Kushner, who are Jewish.

Trump stepped into the role of national consoler, a title he wears uncomfortably, as he arrived in Squirrel Hill, the neighborhood where he faced an uneasy welcome. Flowers, candles and chalk drawings filled the nearby corner, including a small rock painted with the number “6,000,011,” adding the victims this week to the estimated number of Jews killed in the Holocaust.

When Air Force One touched down at the airport outside Pittsburgh, the Trumps were not greeted by the usual phalanx of local officials that typically welcomes a visiting president, a reflection of controversy surrounding the visit.

The Trumps later spent more than an hour at the University of Pittsburgh Medical Center, where some of the victims are recovering. As his motorcade wound through downtown Pittsburgh, some onlookers saluted the president with upraised middle fingers and others with downturned thumbs, and a sign that said “It’s your fault.” Inside, Trump visited with wounded police officers and spent an hour with the widow of victim Dr. Richard Gottfried, according to White House press secretary Sarah Huckabee Sanders.

Sanders said Trump did not speak publicly Tuesday to denounce anti-Semitism because he has spoken about it before.

“He wanted today to be about showing respect for the families and the friends of the victims as well as for Jewish Americans,” Sanders said.

Local and religious leaders were divided on whether Trump should have come.

Pittsburgh Mayor Bill Peduto, a Democrat, told reporters before the visit was announced that the White House ought to consult with the families of the victims about their preferences and asked that the president not come during a funeral. Neither he nor Democratic Gov. Tom Wolf planned to appear with Trump.

The White House invited the top four congressional leaders to join Trump in Pennsylvania, but none accompanied him.

A spokesman for Republican Senate Majority Leader Mitch McConnell said he already had events in his home state of Kentucky, pushing back on the suggestion that he declined. Republican House Speaker Paul Ryan’s office said he could not attend on short notice. Democratic Senate Minority Leader Chuck Schumer and Democratic House Minority Leader Nancy Pelosi also opted not to participate.

VIDEO/PHOTOS: An estimated 4000 protesters took part in demonstrations around #Pittsburgh on Tuesday as President and First Lady #Trump were in town to honor the victims of the synagogue massacre on Shabbos. They chanted and held signs with lines like "Words matter!” and “Trump, go home! Some onlookers saluted the president with upraised middle fingers and others with downturned thumbs, and a sign that said “It’s your fault.” SEE FULL COVERAGE ON WWW.THEYESHIVAWORLD.COM [Link in InstaStory]

Earlier in the day, thousands of mourners jammed a synagogue, a Jewish community center and a third, undisclosed site for the first in a weeklong series of funerals for victims of the deadliest anti-Semitic attack in U.S. history.

Dr. Jerry Rabinowitz, Daniel Stein and Cecil and David Rosenthal were among 11 people killed in the shooting rampage at the Tree of Life synagogue Saturday. Robert Gregory Bowers, a 46-year-old truck driver who authorities say raged against Jews, was arrested on federal hate-crime charges that could bring the death penalty.

With Tree of Life still cordoned off as a crime scene, more than 1,000 people poured into Rodef Shalom, one of the city’s oldest and largest synagogues, to mourn the Rosenthal brothers, ages 59 and 54.

💔 PHOTOS: Tearful girls from the local Yeshiva School joined thousands of mourners for the first in a weeklong series of funerals for victims #Pittsburgh synagogue massacre. . Dr. Jerry Rabinowitz, Daniel Stein and Cecil and David Rosenthal were laid to rest on Tuesday. SEE MORE ON WWW.THEYESHIVAWORLD.COM

The two intellectually disabled men were “beautiful souls” who had “not an ounce of hate in them — something we’re terribly missing today,” Rabbi Jeffrey Myers, a survivor of the massacre, said at their funeral.

Myers, his voice quivering, told the Rosenthals’ parents and other family members: “The entire world is sharing its grief with you, so you don’t walk alone.”

The brothers were widely known as “the boys,” the Rosenthals’ sister, Diane Hirt, noted. “They were innocent like boys, not hardened like men,” she said.

She said Cecil — a gregarious man with a booming voice who was lightheartedly known as the mayor of Squirrel Hall and the “town crier” for the gossip he managed to gather — would have especially enjoyed the media attention this week, a thought that brought laughter from the congregation.

Rabinowitz’s funeral was held at the Jewish Community Center in the city’s Squirrel Hill section, the historic Jewish neighborhood where the rampage took place. Two police vehicles were posted at a side door and two at the main entrance.

A line stretched around the block as mourners — some in white medical coats, some wearing yarmulkes, black hats or head scarves — passed beneath the blue Romanesque arches into the brick building.

The 66-year-old Rabinowitz was a go-to doctor for HIV patients in the epidemic’s early and desperate days, a physician who always hugged his patients as they left his office.

“A lot of people are feeling really angry about this. A lot of rage built up inside about this, because of it being a hate crime. Don’t get me wrong; I do. But I’m so overwhelmed with sadness right now that I can’t even be angry right now,” said Robin Faulkner, whose family had seen Rabinowitz for 30 years and counted him as a dear friend. “It’s just such a loss. Just tragic.”

A private funeral was also held for Stein, the 71-year-old men’s club president at Tree of Life.

The other victims’ funerals have been scheduled through Friday.

Among the mourners at the Rosenthal brothers’ funeral was Dr. Abe Friedman, who typically sat in the back row of Tree of Life with the two men but was late to synagogue on Saturday and was not there when the gunman opened fire.

As he stood in line at the funeral, Friedman wondered why he had been spared.

“Why did things fall into place for me?” he asked. “I usually sit in the back row. In the last row, everyone got killed.”

VIDEOS/PHOTOS: Quarterback Ben Rothlisberger and head coach Mike Tomlin led a delegation of #Steelers football players who joined thousands at the funerals of the #Pittsburgh synagogue massacre. . Michele Rosenthal, the team’s former community relations manager, had two brothers, Cecil and David, killed in the attack. They were among the 4 victims whose funeral was held on Tuesday. The others will be held throughout the week. #pittsburghsteelers #nfl

PHOTOS: Ivanka Trump and Jared Kushner joined President and First Lady #Trump in paying respects at a makeshift memorial for the #Pittsburgh synagogue massacre victims at 'Tree of Life'

…Our country mourns the loss of those murdered in cold blood at the Tree of Life Synagogue in a horrific Anti-Semitic attack. We all stand with the families of the victims, the wounded and all of #Pittsburgh. pic.twitter.com/vQpiuyKutL