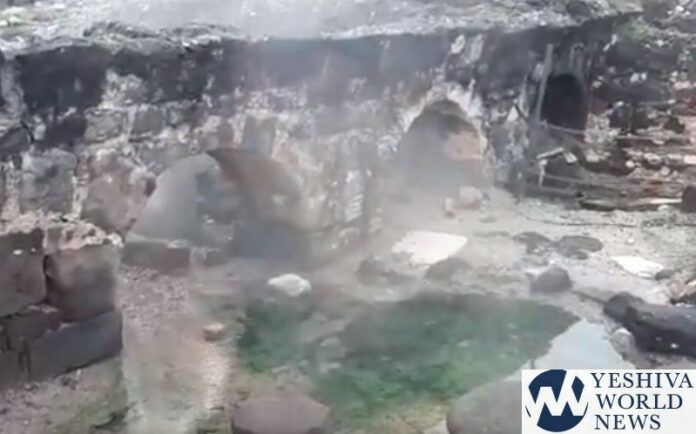 The Roman Spring in Chamat Tiverya, which hasn’t flowed in ten years, began flowing again on Wednesday morning thanks to the heavy rainfall this winter which has raised the Kinneret’s water level. The temperature of the flowing spring is 140 degrees Fahrenheit. According to the Gemara, these ancient springs were heated when they passed the entrance of Gehinnom.

“It’s due to the Kinneret’s rise in water level which put pressure on the aquifer,” explained the manager of the Chamat Tiverya National Park. The Kinneret’s water level, which is currently a meter higher than it was last year at the same time, exerted pressure on the aquifer – the underground layer of water-bearing rock and sediment – and caused the dormant spring within the ground to resume its natural flow.

The spring’s name is derived from the fact that it once served as a feeder to ancient Roman bathhouses, the ruins of which can still be seen at the site. Historical sources say that during ancient times, patients traveled to Tiverya from as far as Athens to take advantage of the healing properties of its natural hot springs.

The 17 natural springs are located on the grounds of the Chamat Tiverya National Park on the shore of the Kinneret.