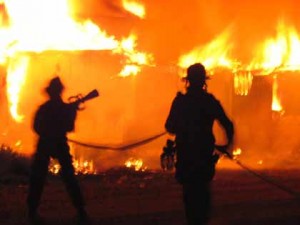 Firefighters in rural Tennessee let a home burn to the ground last week because the homeowner hadn’t paid a $75 fee.

Gene Cranick of Obion County and his family lost all of their possessions in the Sept. 29 fire, along with three dogs and a cat.

“They could have been saved if they had put water on it, but they didn’t do it,” Cranick told MSNBC’s Keith Olbermann.

The fire started when the Cranicks’ grandson was burning trash near the family home. As it grew out of control, the Cranicks called 911, but the fire department from the nearby city of South Fulton would not respond.

“We wasn’t on their list,” he said the operators told him.

Cranick, who lives outside the city limits, admits he “forgot” to pay the annual $75 fee. The county does not have a county-wide firefighting service, but South Fulton offers fire coverage to rural residents for a fee.

Cranick says he told the operator he would pay whatever is necessary to have the fire put out.

His offer wasn’t accepted, he said.

The fire fee policy dates back 20 or so years.

“Anybody that’s not inside the city limits of South Fulton, it’s a service we offer. Either they accept it or they don’t,” said South Fulton Mayor David Crocker.

The fire department’s decision to let the home burn was “incredibly irresponsible,” said the president of an association representing firefighters.

“Professional, career firefighters shouldn’t be forced to check a list before running out the door to see which homeowners have paid up,” Harold Schatisberger, International Association of Fire Fighters president, said in a statement. “They get in their trucks and go.”

Firefighters did eventually show up, but only to fight the fire on the neighboring property, whose owner had paid the fee.

“They put water out on the fence line out here. They never said nothing to me. Never acknowledged. They stood out here and watched it burn,” Cranick said.

South Fulton’s mayor said that the fire department can’t let homeowners pay the fee on the spot, because the only people who would pay would be those whose homes are on fire.

Cranick, who is now living in a trailer on his property, says his insurance policy will help cover some of his lost home.

After the blaze, South Fulton police arrested one of Cranick’s sons, Timothy Allen Cranick, on an aggravated assault charge, according to WPSD-TV, an NBC station in Paducah, Ky.

Police told WPSD that the younger Cranick attacked Fire Chief David Wilds at the firehouse because he was upset his father’s house was allowed to burn.

WPSD-TV reported that Wilds was treated and released.