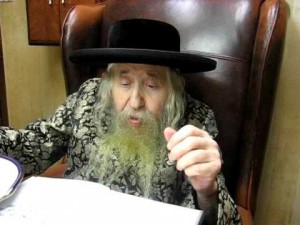 Tosher Chasidim in Canada joined in song to give thanks to the Ribono Shel Olam on Monday evening, when the Tosher Rebbe Shlita visited the Bais Medrash – the first public appearance since he was hospitalized in critical condition a few weeks ago. The Rebbe had joined his Chassidim for the reciting of Tehillim upon the Yartzheit of his grandfather, Rav Elimelech of Tosh ZATZAL, and to celebrate the engagement of an Einikel.

The Rebbe entered the Bais medrash at 7:30, said Tehillim, and then the crowd broke out in singing “Chasdei Hashem”.

Just three weeks ago Yidden around the globe were saying Tehillim for the Tosher Rebbe, HaRav Meshulem Feish Lowy, who had been admitted to Jewish General Hospital in Montreal on Monday evening, October 18th. He had been listed in critical condition with a respiratory infection. His condition quickly deteriorated, and a team of doctors and specialists were flown in from New York to treat the Rebbe.

Bichasdei Hashem, his condition slowly improved, and as was reported exclusively on YWN, he was eventually brought to a NYC hospital in total secrecy. The story remained such a secret, that YWN received dozens of emails from big supporters of the Rebbe, and many Tosher Chassidim accusing YWN of false reporting. On Sunday November 14, the Rebbe was secretly flown back to Kiryas Tosh on a private jet along with a team of doctors.

A team of doctors and nurses continue to treat him in his home – part of which has been converted into an emergency care facility for the Rebbe.