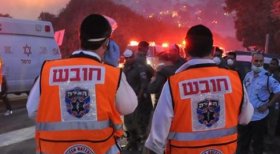 Yidden around Eretz Yisroel gathered to say tehillim tonight, the second of Chanukah, in regards to the horrific wildfire in Northern Eretz Yisroel. A large Atzeres tefillah was also held at the Kosel, and was attended by Rav Shlomo Amar and other Rabbonim. As of this posting (7:35PM EST) , at least one area in Haifa has been evacuated due to the fire approaching the city.

Cars with loudspeakers were driving around Yerushalayim earlier, and were playing the following announcement posted below: