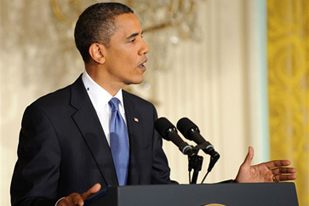 Below are the remarks made by President Barak Obama just one hour ago at the White House Chanukah party. In his opening remarks the President offered his deepest condolences to the families of those lost in today’s wildfire in Northern Israel. The President then stated that the United States is in touch with Israel, and will be providing assistance to Israel as quickly as possible.

THE PRESIDENT:  Oh, this is a good looking group right here.  (Laughter.)

THE PRESIDENT:  Welcome to the White House.  I want to thank all of you for joining us in celebrating the second night of Hanukkah.  Happy Hanukkah, everybody.  (Applause.)

We are joined tonight by Ambassador Michael Oren, of Israel.  Where’s Michael?  (Applause.)  He’s way back there.  And so I want to begin by offering our deepest condolences to the families and loved ones of all of those who’ve died as a result of the terrible forest fire in northern Israel.

As rescuers and firefighters continue in their work, the United States is acting to help our Israeli friends respond to the disaster.  A short while ago, our ambassador in Tel Aviv, Jim Cunningham, issued a disaster declaration, which has launched an effort across the U.S. government to identify the firefighting assistance we have available and provide it to Israel as quickly as possible.  Of course, that’s what friends do for each other.

And, Mr. Ambassador, our thoughts and prayers are with everybody in Israel who is affected by this tragedy and the family and loved ones of those in harm’s way.

Tonight, it’s an honor to welcome so many friends and leaders from the Jewish community and beyond.  And I want to start by recognizing my Special Envoy for Middle East Peace, George Mitchell, who is here.  Please give him a round of applause.  (Applause.)  And all the other outstanding members of the diplomatic corps who are here.

One third of the Supreme Court is here.  (Applause.) One of my favorites, Justice Ginsburg, is hiding out here in the front.  (Laughter.)  She really is here.  It’s hard to see.  (Laughter.)

I want to also acknowledge somebody who I rely on day in, day out, who is not only a great Vice President, but is also — (laughter) — one of my dearest friends; Joe Biden is in the house.  (Applause.)

And to all the members of the administration, and members of Congress, and all the state and local leaders who are with us today, welcome.

I want to thank Joshua Redman for gracing us with his talent and helping us with the music.  (Applause.)

And finally, I want to thank the rabbis and lay leaders who have traveled from all over the country to be here.  Yes, you can give yourselves a round of applause.  (Applause.)

Now, tonight, we gather to celebrate a story as simple as it is timeless.  It’s a story of ancient Israel, suffering under the yoke of empire, where Jews were forbidden to practice their religion openly, and the Holy Temple — including the holy of holies — had been desecrated.

It was then that a small band of believers, led by Judah Maccabee, rose up to take back their city and free their people.  And when the Maccabees entered the temple, the oil that should have lasted for a single night ended up burning for eight.

That miracle gave hope to all those who had been struggling in despair.  And in the 2,000 years since, in every corner of the world, the tiny candles of Hanukkah have reminded us of the importance of faith and perseverance.  They have illuminated a path for us when the way forward was shrouded in darkness.

And as we prepare to light another candle on the menorah, let us remember the sacrifices that others have made so that we may all be free.  Let us pray for the members of our military who guard that freedom every day, and who may be spending this holiday far away from home.

Let us also think of those for whom these candles represent not just a triumph of the past, but also hope for the future — the men, women and children of all faiths who still suffer under tyranny and oppression.

That’s why families everywhere are taught to place the menorah in public view, so the entire world can see its light.  Because, as the Talmud teaches us, “So long as a person still has life, they should never abandon faith.”

Now, the menorah we’re using tonight, and the family who — who is going to help us light it, both stand as powerful symbols of that faith.

This beautiful menorah has been generously loaned to us by Congregation Beth Israel in New Orleans.  (Applause.)  Five years ago, when Hurricane Katrina hit, the synagogue was covered in eight feet of water.   Later, as the cleanup crew dug through the rubble, they discovered this menorah, caked in dirt and mold.  And today it stands as a reminder of the tragedy and a source of inspiration for the future.

And that feeling is shared by Susan Retik.  It’s a feeling they know all too well.  After her husband, David, was killed on September 11th, Susan could have easily lost herself in feelings of hopelessness and grief.  But instead, she turned her personal loss into a humanitarian mission — co-founding “Beyond the 11th,” a group that reaches out to Afghan widows facing their own struggles.

So on this second night of Hanukkah, let us give thanks to the blessings that all of us enjoy.  Let us be mindful of those who need our prayers.  And let us draw strength from the words of a great philosopher, who said that a miracle is “a confirmation of what is possible.”

(The blessings are offered.)

THE PRESIDENT:  So happy Hanukkah to all of you.  We’re going to see most of you downstairs.  Be patient in the line.  (Laughter.)  And I just want to let everybody know that, yes, they will be able to Photoshop my lip for the picture.  (Laughter.)  Happy Hanukkah, everybody.  (Applause.)