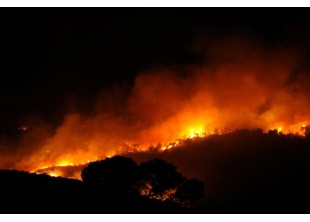 ALL UPDATES, VIDEO & PHOTOS BELOW:

9:40AM EST: As YWN reported earlier, a massive wildfire is currently raging in Northern Israel. Villages have been evacuated as well as a prison. Although details are still sketchy, a bus evacuating people from the area has caught fire while escaping the blaze, and then overturned. As of this point, there are eleven people reported killed, and scores of others injured. Some sources report that the bus is full of prisoners who were being evacuated from the Damon prison.

An large response of MDA Paramedics, Ichud Hatzolah, and Police are on the scene. Additionally, the Israeli Air Fore has launched multiple choppers from the elite 669 unite to the scene to evacuate the wounded.

UPDATE 9:45AM EST: The IAF 669 is airlifting at least 10 people in critical condition to medical facilities around the country.

UPDATE 10:02AM EST: Multiple reports of as many as 40 people killed in the blaze.

UPDATE 10:03AM EST: There may be two incidents resulting in the number of fatalities. A bus incident evacuating people, and a prison may have been consumed by the fire.  This remains to be confirmed as there is many conflicting reports coming to YWN Israel from the scene.

UPDATE 10:43AM EST: The total (unconfirmed) number of people killed has been placed at 51.

UPDATE 10:50AM EST: Heavy response was dispatched to Givat Wolfson moments ago for reports of 20 people trapped from a fire. This is approximately 2 kilometers from Beit Oren where the main fire originated. FD reports that the people have successfully been evacuated.

UPDATE 10:52AM EST: A senior police official from Haifa – possibly the Chief of Police – has been killed in the fire.

UPDATE 11:06AM EST: The IDF has dispatched “D9 Bulldozers” to Northern Israel to assist firefighters in the huge fire in the forests of Mount Caramel.

UPDATE 11:10AM EST: Prime Minister Binyamin Netanyahu expressed his support for the search and rescue teams that were working on the Carmel fire that broke out on Thursday morning near the Druze village of Usfiya. The prime minister highlighted that the main aim is save lives and protect the lives of those that are involved in the rescue efforts.

UPDATE 11:20AM EST: Prime Minister Benjamin Netanyahu said on Thursday that the Carmel area fire was a “catastrophe the likes of which we have never known. We will have to draw many lessons in order to deal with catastrophes of this kind but right now, everything must be about saving lives.”

UPDATE 11:22AM EST: Prime Minister Benjamin Netanyahu spoke to the leaders of Russia, Italy, Greece and Cyprus and appealed to them for assistance in extinguishing the Carmel fire which broke out on Thursday. Netanyahu asked the countries’ to send fire extinguishing planes into the area in order to help Israel contain the fire.

UPDATE 11:29AM EST: 22 bodies have been identified on the bus. Reports state that many are wardens from the prison who were being evacuated.

UPDATE 11:32AM EST: ZAKA reports that they have dispatched 250 volunteers to the scene.

UPDATE 12:07PM EST: Minister Eli Yishai has just boarded a chopper, and flying to the scene.

UPDATE 12:10PM EST: Fire officials state that this fire may take days to bring under control.

UPDATE 12:14PM EST: Sources report that the village of Beit Oran has been totally destroyed.

UPDATE 12:19PM EST: The country of Greece tells Israel that they have dispatched fire-fighting aircraft to Northern Israel.

UPDATE 12:48PM EST: Israel asks the U.S. for assistance. Additionally, the Foreign Ministry has turned to Bulgaria, Croatia< Spain, France, Romania and others to please send planes which can dump chemicles on the fires.

UPDATE 12:49PM EST: At 20:00PM IL, the Prime Minister will hold a press conference, and update the country on the situation.

UPDATE 12:50PM EST: Hundreds of IDF Soldiers have been deployed to the area to assist emergency personnel.

UPDATE 12:52PM EST: As many as 70 people may have been killed, reports state.

UPDATE 1:00PM EST: It’s been confirmed that the bus which was engulfed in flames was carrying prison guards which were driving to the prison to evacuate the prisoners.

UPDATE 1:05PM EST: The University of Haifa is taking appropiate measures to protect their campus should the fire continue its destructive path.

UPDATE 1:26PM EST: Due to the fire in Northern Israel, the Roshei Yeshiva of Ponavez have instructed the entire Yeshiva to gather in the Bais medrash and recite Tehillim.

UPDATE 2:03PM EST: A firefighter spokesman said the blaze had traveled 1500 meters in less than three minutes, adding, “the bus had no chance. They tried to escape but were burned alive. It was a horrific scene.” The spokesman added that the fire was very far from the road on which the bus was travelling when it first set off towards the prison, but had spread far faster than expected.

UPDATE 2:13PM EST: Deputy Health Minister MK Ya’acov Litzman drove to Rambam and other hospitals to ensure that they were able to handle the injured but was told that while they waited to receive injured in the emergency room, “all that arrived were bodies.”

UPDATE 2:15PM EST: Police are talking to witnesses who state that this fire was intentionally started by someone. Additionally, this fire started in as many as four places.

UPDATE 2:17PM EST: The IDF Home Front Command has established a command post near the scene of the blaze and was coordinating relief efforts together with the Northern Police District.

UPDATE 2:57PM EST: Hagon Chacham Ovadia Yosef Shlita reacted with tears upon hearing of the tragedy, and called on Am Yisroel to join him in davening that the fire be brought under control, and for the memory of the Niftarim.

UPDATE 3:24PM EST: Netenyahu is at the Command Post along with the Chief’s of the IDF, Police, FD, MDA, ZAKA, MK’s and Ministers.

UPDATE 3:29PM EST: At 11:30PM tonight there will be a Yom Tefillah at the Kosel lead by Chachm Ovadia Yosef and Rav Shlomo Amar Shlita.

UPDATE 4:36PM EST: A total of 53 bodies have so far been recovered.

UPDATE 4:54PM EST: Egypt has announced it will also be sending fire extinguishing places to Israel following the Carmel fire disaster. Planes from foreign countries will start arriving in Israel in the early morning hours on Friday.

UPDATE 5:00PM EST: It has been estimated that more than 10,000 people have been evacuated from their homes.

UPDATE 5:13PM EST: Prime Minister Binyamin Netanyahu said Thursday “I will declare this a day of mourning,” in response to the fire that was spreading in the Carmel forest area, that left 40 prison wardens dead and dozens injured. Netanyahu pleaded with the public to stay away from the area of the fire, which was spreading in the Carmel area and to listen for emergency instructions.

UPDATE 6:21PM EST: Police Insp.-Gen. David Cohen was overseeing rescue operations in the Carmel region overnight Friday. Cohen completed an evaluation meeting and issued instructions to emergency officials for the remainder of the Thursday night and into Friday. The instructions included filming the area from above with IDF assistance throughout the night, and launching an information center for members of the public together with the Haifa municipality.

UPDATE 7:00PM EST: Police have decided to evacuate residents in a number of streets in Haifa’s Denia neighborhood as the massive Carmel fire threatens to spread further.

UPDATE 9:05PM EST: Eizer Mitzion is asking people to donate blood in Bnei Brak should the Chas Veshalom need it.

UPDATE 9:09PM EST: There will be a Yom Tefillah at the Kosel tomorrow (Friday) for children due to the fire.

YWN ISRAEL WILL CONTINUE BRINGING YOU UPDATES AS THEY ARRIVE