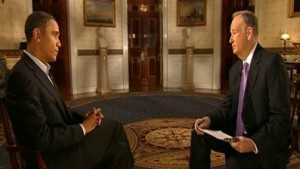 If politics is more your game, there was another, much-hyped showdown to watch before Sunday’s Super Bowl: President Barack Obama vs. Fox News host Bill O’Reilly.

The two haven’t sat down since 2008, when Obama was a presidential candidate. Since then, his administration has been at odds with the cable news outlet, with former communications director Anita Dunn declaring it “opinion journalism masquerading as news.”

Here’s what the ideological adversaries talked about during the 14-minute interview:

Obama: Trying to suppress your own people is something that is not sustainable, and part of the message we’re seeing all around the world is that when you resort to suppression … that does not work.

O’Reilly: Yeah, but it worked for 30 years, so (President Hosni Mubarak) had his run.

O’Reilly: Other people see it as a huge government intrusion and you guys just want to take over decision-making for Americans.

Obama: Bill, I just want to be clear about this. If you look at what we’ve done, what we’ve said was, ‘If you’ve got health care you like, you keep it.’

O’Reilly: I know all about it. Mr. President, I listen to it every day.

O’Reilly: Do you deny that you’re a man who wants to redistribute wealth?

Obama: Absolutely. Bill, I didn’t raise taxes once, I lowered taxes over the past two years.

O’Reilly: Does it disturb you that so many people hate you?

Obama: I schmooze with everybody when they come. Give them a little bit of time, but once the game starts they can just sit down and watch the game. … I don’t want them coming up chitin’ and chattin’.