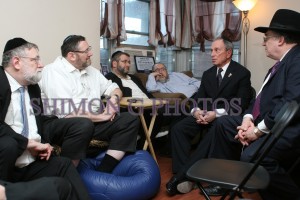 Mayor Michael Bloomberg paid a Shiva call to the Segal family, who is currently sitting Shiva on the loss of their brother, R’ Moshe, as was reported by YWN. Mayor Bloomberg first offered his condolences, and then discussed some very interesting topics, such as overcrowding in emergency rooms, Obamacare, immigration, smoking, eating salt, NYC traffic, and some other interesting items.

Shimon Gifter was there, and captured it on video for our readers.

YWN would like to publicly offer our condolences to the Segal family.

Nachum Segal is a famous Jewish Radio DJ in the NYC area.