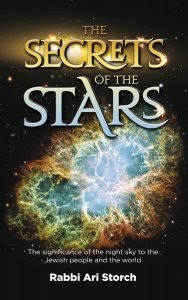 I recently picked up the new book, The Secrets of the Stars, by Rabbi Ari Storch. It offered me an entirely new perspective about the mazalos and other concepts from the night sky and their importance in the Torah. This sefer was lucid, informative, and enjoyable.

When I began reading this work, I assumed I would learn what it means to be born under a certain mazal, or why we wish people “mazal tov” at monumental events—ideas that had always been of interest to me simply because they are so pervasive in our culture. Yet I was astounded to see that this book actually encompasses so much more than just these topics. The Secrets of the Stars uncovers the fact that to the Torah Jew, the stars are infinitely more than just a beautiful display of nature; they carry tremendous messages within them. Much of Torah and the history and future of the Jewish nation are, in fact, encoded in the night sky.

I found it amazing to learn how Chazal and the Rishonim saw the Torah and its important messages written in plain sight for all to see, in the sky—as if the Torah’s ideas are actually woven into the tapestry of the sky above us! Another concept I learned from this sefer was that familiar stories from the Torah, such as Yosef’s dreams and the Mabul, are depicted in the stars. While I’m sure such concepts would be of automatic interest to those with a background in science or astronomy, I was surprised that even I, who do not have such knowledge, could be so fascinated by it.

The truth is, when starting to read The Secrets of the Stars, I must say that I was a little hesitant. As stated, I have no background in astronomy, nor can I say that science was ever my strong point. I wondered how much I’d be able to enjoy a book that, as I assumed, was a very technical and scientific work. But I had no reason for concern. While Rabbi Storch definitely discusses scientific concepts throughout the book, he does so with such clarity that I was not only able to follow along with, but even appreciate, all that I read. The astronomy was presented subtly and with ease, and I didn’t feel that it read as a textbook at all. I found it even more helpful that the author included many charts and illustrations to explain complex or hard-to-picture concepts.

What clinched my decision to buy this book was the glowing haskamos it carries from Hagaon Harav Dovid Cohen shlita, Hagaon Harav Yisroel Belsky shlita, and Hagaon Harav Asher Weiss shlita. And I am so glad that I did read the book, because it gave me such a wonderful new outlook and appreciation, not only for Torah but for the great beauty and intricacies of the night sky.

And while I still do not think that I will be purchasing a telescope any time in the near future, I can definitely say that I will never be able to look at the night sky in the same way as I did prior to reading The Secrets of the Stars.