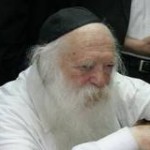 HaGaon HaRav Chaim Kanievsky Shlita, a son-in-law of Maran Posek HaDor HaGaon HaRav Yosef Sholom Elyashiv Shlita, has called on the tzibur to accept a taanis on Thursday, 23 Shevat 5772 on behalf of the posek hador.

Rav Kanievsky has stipulated however that this is only for those capable of doing so without negatively impacting one’s learning, for fasting at the expense of compromised Torah study will not have accomplished its goal.

Doctors at Shaare Zedek Medical Center today, 22 Shevat, will attempt to extubate the gadol hador and replace the endotracheal tube providing his airway with a tracheotomy, a relatively minor surgical procedure by which an incision is made in one’s throat, entering one’s trachea and bypassing one’s mouth. Obviously, on a 101-year-old patient, no procedure is minor.

While this was attempted earlier in the week, albeit without success, reports from the hospital signal today the physicians feel the move is critical for the rav’s continued treatment.

The tzibur is requested to continue being mispallel for Rav Yosef Sholom ben Chaya Musha b’soch kol cholei am yisrael.