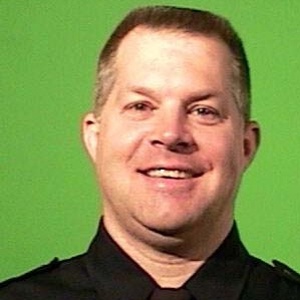 An NYPD detective pursuing a suspect was shot in the arm inside a Harlem subway station Tuesday afternoon, officials said.

Detective Kevin Herlihy was shot in the station at 145th Street and St. Nicholas Avenue on the A, B, C and D lines. He was taken to Columbia Presbyterian Hospital with a gunshot wound to the left forearm, and his condition was described as stable.

The suspect was shot multiple times and killed, officials said. A .22-caliber revolver was recovered at the scene, Police Commissioner Ray Kelly said at a hospital briefing.

Officials identified the suspect as Michael McBride, pictured below, who was suspected of shooting his ex-girlfriend’s 21-year-old daughter Monday in the Rockaways, Kelly said. She was shot in the head and is in critical condition.

Kelly said officers from the Queens violent felony squad had McBride, 52, under surveillance on Tuesday, and were following him down 145th Street, when he entered the subway station.

Once inside the subway station, McBride turned and fired at Herlihy, who returned fire, Kelly said.

“He not only survived but was able to stop his assailant from shooting anyone else,” Kelly said.