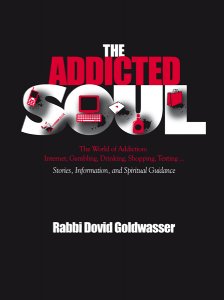 “With more than two hours to go before sundown this past Friday, I logged onto the Web. When I glanced up from the screen, I saw the hands on the clock…they had moved three hours ahead, while I was glued to the screen! Three hours!

“Shabbos had come in, and I had been oblivious.  I was never mechallel Shabbos before in my life. Never! And now, because of a mindless pursuit, I had done the unthinkable…”

“I believe my father has a drinking problem. When he comes home every evening from work, he has a few glasses. Depending on the amount he imbibes, he may either get abusive and violent, or he may pass out on the couch. Shabbos has basically been ruined for the family. We’ve discontinued our practice of having guests a while ago. Often he doesn’t even make it to shul on Shabbos morning because he’s plastered…”

“In the last few years I would often find myself wandering the aisles of the large neighborhood drugstores and chain stores, checking out the glittering trinkets, colorful cosmetics, array of perfumes, and other small items that caught my eye. First I only bought something when I had a few dollars. Then I got a credit card offer in the mail, and I quickly filled out the form and was approved.

“Voila! I now had my own money to spend. I didn’t know what to buy first! … The emptiness I felt inside me could only be satisfied with more purchases, more lipsticks, more baubles… I knew I was out of control, but I needed that ‘pick-me-up’ more…”

What does Danny, Uri’s father, and Shifra all have in common? They are all addicts, held tightly in the vise of an addiction that has become larger-than-life to them.

The world we are living in nowadays is not the same as it was years ago. Or, to put it in simpler terms, things aren’t how they used to be. How else can one describe the frightening trend of obsessions with various mediums, the substance abuse, the growing number of addicts even within our own insular communities?

It was to fight this development that Rabbi Dovid Goldwasser, world-renowned rav, speaker, and author, wrote The Addicted Soul. This book focuses on the common addictions of drinking, gambling, drugs, internet use, texting, shopping, eating, and relationships. In his clear, thought-out way, Rabbi Goldwasser first shows the destruction and harm of each addiction, providing glimpses into the lives of real people who were addicted to something, where he was personally involved. He then presents methods for obtaining help and releasing oneself from addiction’s tight grip.

You’ll meet Danny, Uri, Shifra, Zoe, Elana, Sam, and many others with common addictions. You’ll read about the horrors they experienced with their addictions, as well as the guidance they were given and the steps that they took—which can be taken by anyone—to help themselves break out of their negative patterns.

The Addicted Soul is a groundbreaking book, one that is long-needed in our turbulent times. Addiction is not something to be taken lightly, as Rabbi Goldwasser explains in great depth. With The Addicted Soul, a person who finds himself hooked onto something in an unhealthy way has taken his first step toward getting help…and gaining his freedom.