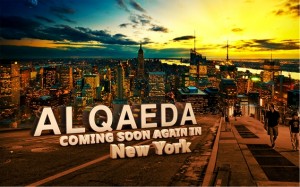 The ominous graphic posted on terrorism websites suggesting an Al Qaeda attack is yet another reminder that New York City is the No. 1 target for terrorists, Police Commissioner Raymond Kelly said Tuesday.

“It’s not tied to any threat,” Kelly said. “But it’s obviously a cause of concern.

“It reminds us that New York is still very much on their (terrorists’) minds.”

The cops have their cyberexperts scrambling to figure out who posted it on the As Ansar forum, a website used by jihadists.

“Al Qaeda coming soon again in New York,” blares the logo, which appears in bold yellow letters over a composite of the city’s skyline.

Kelly did not dismiss the possibility the graphic was posted as a joke, or to scare New Yorkers.

“They want to keep the message out there,’’ Kelly said, in describing jihadist websites. “They want to give us a certain amount of angst and anxiety.

“It’s part of their approach.”

The commissioner said officers assigned to intelligence and counterterrorism duties routinely scour the Internet, which he described as “the new Afghanistan.”

“That’s where training happens,’’ he said.

“That’s where radicalization happens. It has been a very valuable tool for terrorists.”

Kelly made his comments shortly before addressing a Police Headquarters gathering of Jewish leaders as part of the NYPD’s pre-Passover security briefing.

As always, the NYPD will devote extra officers to Jewish neighborhoods and to houses of worship.