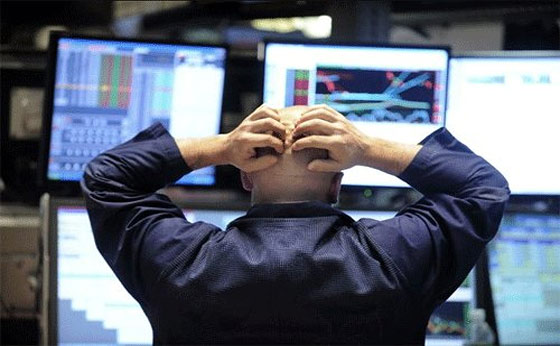 Stocks plunged again Tuesday, continuing a rocky ride for Wall Street, after an economic report out of China rekindled fears that the world’s second-largest economy is slowing more than previously anticipated.

The sell-off adds to what has been a difficult few weeks for U.S. and international markets. U.S. stocks just closed out their worst month in more than three years. Tuesday’s drop also dashed hopes that, after some relatively calm trading Friday and Monday, the stock market’s wild swings were coming to an end.

“This market remains fragile,” said Jack Ablin, chief investment officer at BMO Private Bank. “There’s nothing fundamentally wrong with the U.S. economy, but we are going through this correction process. We’ve got a rocky road ahead of us.”

Stocks started the day sharply lower and never recovered, with the Dow Jones industrial average falling as much as 548 points. No part of the market was spared. All 10 sectors of the Standard & Poor’s 500 index fell more than 2 percent. Just three stocks in the S&P 500 closed higher.

As it’s been for the last several weeks, the selling and problems started in Asia.

An official gauge of Chinese manufacturing fell to a three-year low last month, another sign of slowing growth in that country. The manufacturing index, which surveys purchasing managers at factories, dropped to a reading of 49.7 in August from 50.0 in July. A reading below 50 indicates a contraction.

China’s stocks sank on the news, with Shanghai Composite Index closing down 1.2 percent. The index has lost 38 percent of its value since hitting a peak in June.

The Chinese economy has been a focus for investors all summer, and the concerns have intensified in the last three weeks. China devalued its currency, the renminbi, in mid-August. Investors interpreted the move as a sign that China’s economy was not doing as well as previously reported.

Investors moved into traditional havens like bonds and gold Tuesday. Bond prices rose, pushing the yield on the benchmark 10-year Treasury note down to 2.16 percent from 2.22 percent on Monday. Gold rose $7.30, or 0.6 percent, to settle at $1,139.80 an ounce.

Faced with the possibility of slowing demand in China, the commodity markets once again took the brunt of the hit.

Energy stocks were once again among the biggest decliners. Exxon Mobil fell nearly 4 percent and Chevron fell 2.5 percent. Exxon is down 22 percent this year, Chevron 30 percent.

In a sign of how battered energy companies have been this year, ConocoPhillips announced it was laying off 10 percent of its workers, roughly 1,800 workers, as a reaction this year’s plunge in oil prices.

Along with worries about China, speculation about whether or not the Federal Reserve will raise interest rates as soon as this month continues to weigh on markets. Traders say a lot hinges on the August jobs report, which will be released this Friday. Economists are forecasting that U.S. employers created 220,000 jobs in the month and that the unemployment rate fell to 5.2 percent.

The Federal Reserve meets September 16 and 17. Some economists are predicting that policymakers will be confident enough in the U.S. economic recovery to raise interest rates for the first time in almost a decade. While Fed officials are mostly focused on the U.S. economy, they cannot ignore problems in the global economy.

“China’s problems are totally a concern for the Fed,” said Tom di Galoma, head of rates trading at ED&F Man Capital. “With inflation remaining low here, I just don’t a reason why they would raise rates.”