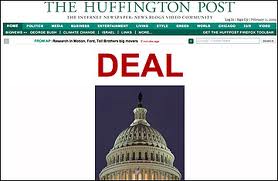 AOL Inc. agreed to buy the Huffington Post for $315 million as the Internet company spun off from Time Warner Inc. increases its investments in online content to help revive growth in advertising revenue.

The offer includes about $300 million in cash and the deal will likely be completed late in the first quarter or early in the second, New York-based AOL said in a statement on Business Wire today. Co-founder Arianna Huffington will be named president and editor-in-chief of the Huffington Post Media Group, according to the statement.

The deal follows AOL’s acquisitions of the TechCrunch blog and 5Min Media last year as the company invests in specialized websites and production of original video content to generate Internet traffic and attract advertising revenue. The number of unique visitors at closely held Huffington Post, which aggregates articles and publishes its own content, has grown to about 25 million a month since its debut in 2005.

AOL and the Huffington Post will hold a conference call to discuss the deal at 8 a.m. New York time, according to the statement.

Arianna Huffington, a Greek-born, Cambridge-educated author, said in an interview in December the news site would post its first annual profit in 2010.

The site has benefited as newspapers and magazines lose readers and advertisers to the more interactive experience of Web services. While the site’s number of visitors trail behind those of the New York Times, it exceeds those of online-based rivals such as the Daily Beast and the Drudge Report, according to estimates at ComScore Inc.