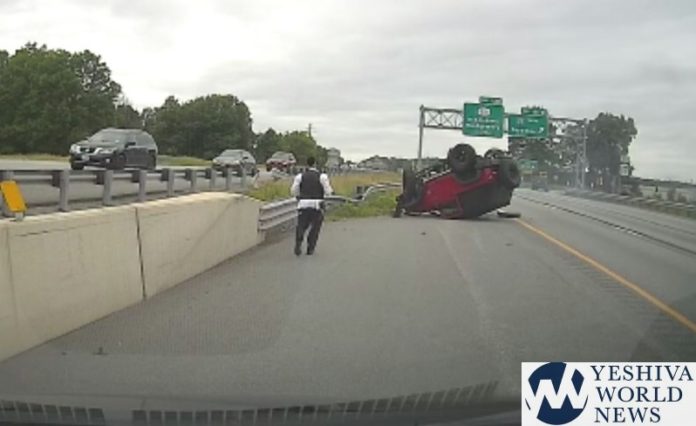 Once again, a Hasidic man has made an incredible Kiddush Hashem, but this incident has more to the story.

As can be seen in the attached dashcam video, a Hasidic man was driving on Route 17 West near Exit 120 on Monday, when he witnessed a vehicle overturned. He immediately parked his vehicle on the shoulder, and ran to offer assistance to the occupants.

Shockingly, dozens of vehicle pass by in both directions, without even one person bothering to stop and see if any help was needed. It took nearly a minute until second person from the opposite direction ran to render aid.

Yehuda (Yida) Leib Weiss, a Pupa Chosid, is the man seen in this video, and he told YWN that when he approached the vehicle, the occupants were all blue in the face. They were all alive thanks to wearing seat belts, but they were trapped in a position which did not allow themselves to open the seat belts and were gasping for air. Weiss quickly cut the seat belts, allowing them occupants to breath normally, and exit the vehicle. They were thankfully all in stable condition.

Meanwhile, in another incredible twist to this story, Weiss tells YWN that he was heading to traffic court where was due to be in front of a judge at the time of this crash. He had received a minor traffic ticket a year ago, while returning from the Chesed Shel Emes Cemetery in Woodridge, where they had just placed Matzeivos for dozens of Mais Mitzvah.

Due to him stopping at the accident, he arrived late to his court appearance. He told the judge what had just happened and why he was late, and the judge praised his actions and dismissed the summons.