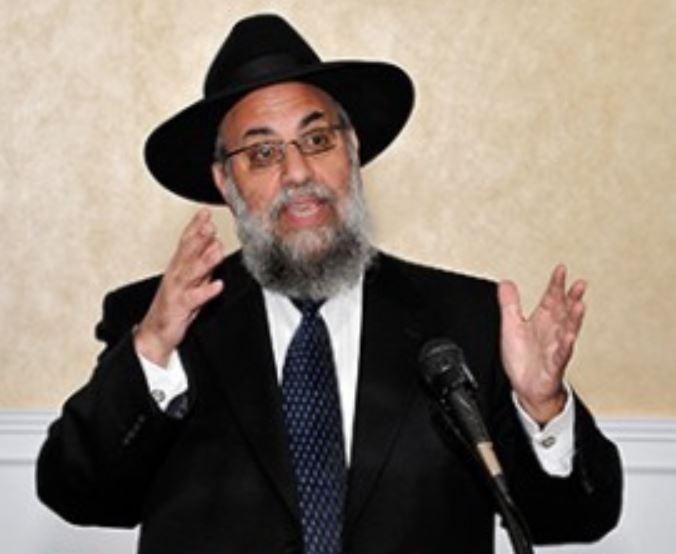 The incomprehensible series of events the last few days has caused me to reflect on something very unsettling that I heard from a prominent Chassidic speaker many years ago. He shared the following Chassidic tale that he himself heard from an elderly Chassidic Yid upon his arrival in this country after the war.

The Rizhiner Rebbe was once sitting with some of his Chassidim and he went into a trance. It was clear that he was visualizing something beyond the confines of his room. Later he related to them, that there will be a time just before Moshiach arrives, when the “bilbul”, the confusion and turmoil will be so strong that it will take extraordinary strength to remain an Ehrliche Yid. People will have to climb the bare walls and hold on with their fingernails to just remain true to the torah and steadfast in their Emunah.

For the first time in many years, I feel that the Rebbe’s unsettling predictions could be referring to our time in general and to these last few days in particular.

First, after decades of promises and assurances from every U.S. President, only to be disappointed again and again, all of a sudden one of the most unpredictable Presidents to ever assume that position, quickly and without focusing on the ramifications, proclaims to the entire hostile world that Yerushalayim belongs to us.

The euphoria did not last very long in our machane, when the numbing news was spread that the Gadol Hador and Zkan Rosh Hayeshiva, Rav Ahron Leib Shteinman ZT”L was no longer here to lead us through these troubling times.

One of the leading Gedolei Rosh Yeshivas of our day, confided to me in the days after the Petira, that he hasn’t felt so personally devastated since the loss of his own Rebbe, Rav Aharon Kotler ZT”L decades ago. And he explained why he felt so lost. Over the last decades, when the Gedolei Hador passed away the Hashgocha Elyona orchestrated it so that for a period before they died, due to their age or infirmity, they slowly phased out of their position as “Navi” of the Dor for Klal Yisroel. This allowed for the person that HKB”H chose to lead Klal Yisroel next, would be firmly in place when they were finally taken from us.

However despite Rav Ahron Leib’s frailty the last few months, and his public access greatly limited, the Rosh Yeshiva continued to lead and guide the Dor from his humble abode. Then all of a sudden, he was taken from us, without a clear direction as to who the Hashgocha Elyona will direct us to. Thus , this Rosh Yeshiva explained, makes the colossal loss that much more painful for us.

Even before we were able to start getting used to a new world without the Rosh Yeshiva ZT”L, Klal Yisroel faced another devastatingly painful loss, one too painful to even comprehend, with the deaths of several members of the Azan family in a horrific fire.

I happened to find myself on that next morning in Sloan Kettering hospital visiting a dear friend who is in desperate need of a refuah. As I walked past the waiting room for visitors I saw a frum woman sitting by herself and crying uncontrollably. I felt I had to do something and I approached her softly and asked her if there was anything that I could do for her. She responded that she just heard about the fire in Flatbush and the tragic loss of life of “this beautiful” family and she is totally broken at what happened. I asked her if she knew them personally and she responded, “no, I do not know them, but even so I just can’t stop crying for them”.

Then even before our collective tears could be dried, comes the incredible news of the release fo Reb Sholom Mordechai Rubashkin after so many years of suffering for him and his family.

Spontaneous celebration broke out all over the Yiddishe world. People were dancing in the streets and sharing the wonderful news with everyone they knew. This, despite the embers at the Azan house still smoldering & reeking from a burnt smell.

From aveilus to euphoric celebration and then back again, what is going on? What message is HKB”H sending us? Who will be here to guide us through all of this with the Rosh Yeshiva ZT”L no longer here to explain with clarity what is the Ratzon Hashem and what is the message for us.

Is this what the Rizhiner Rebbe meant, that just before Moshiach comes, the bilbul will be so great that we will have to hold on strong and tight to get through it. Are these the days that he saw in his vision years ago?

Each one of us on our own level is dealing with dual emotions, deep heartfelt pain simultaneously with euphoria and extreme joy with events that has so deeply affected different families in the community of Klal Yisroel.

This past Friday night right before making Kiddush, I shared with my wife something that I just heard in shul. Between Kabbolas Shabbos and Maariv in my shul, my son in law, Rabbi Yudi Jeger shares a few minute Dvar Torah on Hilchos Shabbos. This time he concluded his Dvar Torah by suggesting that before we make Kiddush, we should take a brief moment to think of Reb Shalom Mordechai, who for the first time in 8 years will be saying Kiddush with his wife and children by his side and we can only imagine the incredible Simcha that he is experiencing tonight. Maybe we should think for a moment that we do so every Friday night in the presence of our families, and maybe we take for granted what a chessed it is for us to be able to do so and maybe we should tap into his Simcha tonight and feel some of that Simcha ourselves tonight.

I thought it was a profound thought and when I was about to start my own Kiddush, I shared this with my wife. My wife, whose sensitive soul is light years ahead of mine, responded in kind. She said, “actually I am thinking right now about a different family. I am thinking about the Azan family. How last Friday night the husband/father made kiddush for his beautiful family sitting around the Shabbos table and that would be the last time that this family will ever do so again, that’s what I am thinking about now.”

We were both quiet for a few moments and then I proceeded to make Kiddush with the images of both the Rubashkin and Azan families in my mind at the very same time. Somehow, hoping that the tranquility and atmosphere of Kedushas Shabbos would provide some clarity to these opposing emotions and thoughts.

The only thing however that is abundantly clear is that HKB”H controls everything in this world and we control absolutely nothing, though on some deep level we think that we do.

I once read an insightful comment from the Pittsburgher Rebbe ZT”L. The Rebbe often came to the States to raise money for his Yeshivohs in Eretz Yisroel. He would often hire a taxi to drive him to his appointments while in town. Once the regular driver was not available and sent a replacement. When the Rebbe entered the taxi he was surprised to see that there were two steering wheels in the front of the car on each side. The Rebbe asked the driver to explain this very strange anomaly.

The driver explained to the Rebbe, that I have a young son who is very boisterous and every time he comes into my car, he doesn’t sit still and wants to drive. So I installed a steering wheel on the passenger side which of course is not connected to anything, but when he sits in the car, he plays with the wheel and he thinks he is really driving.

The Rebbe later commented that this was an important Mussar Haskel for us. How many of us think we have our hands on the steering wheel and we control in which direction we are going and if we are going right or left. But in actuality, the wheel is not even connected, it’s totally meaningless and we are not really “driving” at all. This is a metaphor for life. Only HKB”H is at the steering wheel despite the fact that we may think we are.

We are living in very difficult times and in very trying times and we need to just hang on.

Chazal describe the confusing way that HKB”H runs and has always run the world. The direction is clear just the roadblocks are confusing. When it comes to Yosef and his brothers, we find the brothers busy selling Yosef, Yosef busy mourning his fate, Reuven busy mourning his inability to save Yosef, Yaakov was busy mourning for Yosef and Yehuda was busy with Tamar, and HKB”H was busy creating the light of Moshiach.

And so despite our confusion and mixed emotions from one extreme to the other these last few days, we can know full well that the goal & the ultimate direction is vividly clear and we are getting ready for the great light of Moshiach in the coming days.

We just need to hold on for a little bit longer.

Rabbi Aryeh Z. Ginzberg is the rav of the Chofetz Chaim Torah Center of Cedarhurst and the founding rav of Ohr Moshe Torah Institute in Hillcrest, Queens. He is a published author of several sifrei halachah, and a frequent contributor to many magazines and newspapers, where he writes the Torah hashkafah on timely issues of the day. He is also a sought-after lecturer on Torah hashkafah at a variety of venues around the country.