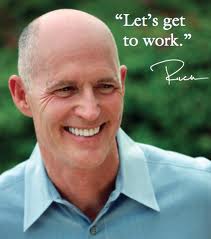 Republican Rick Scott spent more of his own money than any politician in Florida history, but needed a wave of conservative activism to push him across the finish line early Wednesday morning in the closest governor’s race in 16 years.

Democrat Alex Sink conceded defeat about 10:30 Wednesday in a surprise announcement in Tampa. She had said she would wait until all votes were counted.

Scott, spending $73 million on his campaign and promising to bring new jobs to the state, capitalized on the economic anxiety and anti-incumbent sentiment embodied by the tea party, a movement he once helped finance with a campaign-style group that fought President Barack Obama’s health care changes.

“This race is about jobs,” Scott said Tuesday. “We need jobs in this state. I’m going to be the jobs governor. I’m going to get this state back to work. That’s my whole plan.”

In a year when Republicans slaughtered Democrats in Cabinet and congressional races, Scott’s razor-thin margin reflected a level of distrust among voters who were bombarded with mailers and television ads that featured the record Medicare-fraud fine that his former hospital company paid.