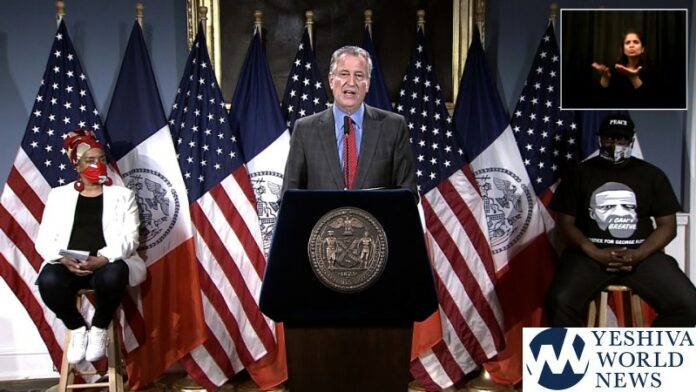 NYC Mayor Bill De Blasio thinks himself justified for the draconian lockdown measures he and Gov Cuomo recently imposed on Boro Park and other community’s in Brooklyn. In a recent press conference on Oct 7, he told reporters that, “We want to protect everyone. This is based on data and science.”

However no less an authority than the World Health Organization (WHO) has condemned the widespread use of lockdowns as the primary method taken to contain COVID-19. In an interview with Andrew Neil of The Spectator magazine, Dr David Nabarro, the WHO’s Special Envoy on COVID-19 said, “We really do appeal to all world leaders: stop using lockdown as your primary control method.” He then went on to cite the many real-world problems that lockdowns cause. “Lockdowns just have one consequence that you must never ever belittle, and that is making poor people an awful lot poorer.” He also forecasted an astonishing possible doubling of world poverty next year and “at least a doubling of child malnutrition” as a result of the lockdowns. According to Dr. Nabarro, the only time the WHO believes a lockdown is justified is when a short time is needed “to reorganize, regroup, rebalance your resources, protect your health workers who are exhausted.”

None of these conditions are the current reality in NYC. The hospitalization rates have remained the same over the past few months after falling off in June.

Neither is the WHO alone. An open letter signed by more than 3,500 medical professionals has recently called on leaders the world over to end the harmful lockdowns.

In the letter called the The Great Barrington Declaration. The authors, professors from Harvard, Oxford and Stanford, write, “As infectious disease epidemiologists and public health scientists we have grave concerns about the damaging physical and mental health impacts of the prevailing COVID-19 policies, and recommend an approach we call Focused Protection.”

Highlighting the huge cost of the pervasive lockdowns, they continue, ” Coming from both the left and right, and around the world, we have devoted our careers to protecting people. Current lockdown policies are producing devastating effects on short and long-term public health. The results (to name a few) include lower childhood vaccination rates, worsening cardiovascular disease outcomes, fewer cancer screenings and deteriorating mental health – leading to greater excess mortality in years to come, with the working class and younger members of society carrying the heaviest burden. Keeping students out of school is a grave injustice. Keeping these measures in place until a vaccine is available will cause irreparable damage, with the underprivileged disproportionately harmed.”

Proceeding to outline a new plan, they note, “Fortunately, our understanding of the virus is growing. We know that vulnerability to death from COVID-19 is more than a thousand-fold higher in the old and infirm than the young. Indeed, for children, COVID-19 is less dangerous than many other harms, including influenza. As immunity builds in the population, the risk of infection to all – including the vulnerable – falls. We know that all populations will eventually reach herd immunity – i.e. the point at which the rate of new infections is stable – and that this can be assisted by (but is not dependent upon) a vaccine. Our goal should therefore be to minimize mortality and social harm until we reach herd immunity.

The most compassionate approach that balances the risks and benefits of reaching herd immunity is to allow those who are at minimal risk of death to live their lives normally to build up immunity to the virus through natural infection, while better protecting those who are at highest risk. We call this Focused Protection. Those who are not vulnerable should immediately be allowed to resume life as normal.”

A recent study conducted by Just Facts, a public policy institute, shows that anxiety and social disruption because of the coronavirus could destroy 7 times more years of human lives than can be saved by strict lockdowns.

The study, based on a broad array of scientific data, computed that stress is one of the deadliest health hazards in the world, and stay-at-home orders, business shutdowns, media frenzy, as well as legitimate concerns about the virus can ultimately cost more lives than lockdowns can save.

With such a solid weight of expert opinion against the use of brutal, suffocating lockdown measures, the question must be asked, why are politicians such as Cuomo and De Blasio so fanatically obsessed with enforcing them? Why continue to use tactics that do more harm than good?

It seems obvious that what at first glance would appear to be genuine concern for the wellbeing and safety of the city is in reality the actions of shortsighted, egotistical, and selfish politicians, who are far more concerned with their public image and maintaining a veneer of control, than in doing what’s right and what’s best for New York. By their reckoning, it is much preferred to shut down the lives of hundreds of thousands of people and be spared the harangues of a hysterical media than to adopt a policy of herd immunity such as that espoused by the authors of The Great Barrington declaration. It takes courage and real leadership to allow the rise in infections in order to give herd immunity a chance to work. Both of these attributes are unfortunately in short supply by the mayor and governor, which means NY can expect to see many more rounds of lockdowns.

After NY’s disastrous first few months which included Gov. Cuomo famous nursing home debacle, the city’s infection rate declined dramatically. Gov. Cuomo went on a “victory tour” and was met with effusive praise by the media including sugary interviews with his brother CNN anchor Chris Cuomo. Small wonder then when small enclaves in Brooklyn saw an uptick in infection rates, he went ballistic. How dare these communities mess with the infection rates that HE personally had lowered? How dare these people think that they can go on with their lives while disturbing the statistics that had won HIM so much praise? It also explains his bizarre and aggressive attitude to the community which was rightly criticized by community leaders. Cuomo turned it personal because for him it is personal. This is a man who, after all, is considered a favorite for the 2024 election.

The general populace is in denial and is in for a rude awakening if they are under the impression that a resurgence of COVID-19 is something that can only happen in Orthodox Jewish neighborhoods. Already in Europe, many countries such as France and the UK are beginning to see a second wave across the country.

Gov. Cuomo And Mayor de Blasio should be made to answer the following questions: Why do they believe the best way to combat COVID-19 is by using methods that the most prestigious global body of public health, The World Health Organization, considers unjustified under current circumstances? Why do they refuse to reexamine the current situation and adopt far more sensible solutions, such as those advanced by the Great Barrington Declaration, instead of mindlessly continuing to take the same extreme course of action used when the virus was completely unknown? How do they plan to account for the catastrophic damage to the city’s economy, the long-term consequences of school closures, and the dramatic increase in mental health issues due to their continued use of extreme lockdown measures solely for the gratification of their self-centered purposes?