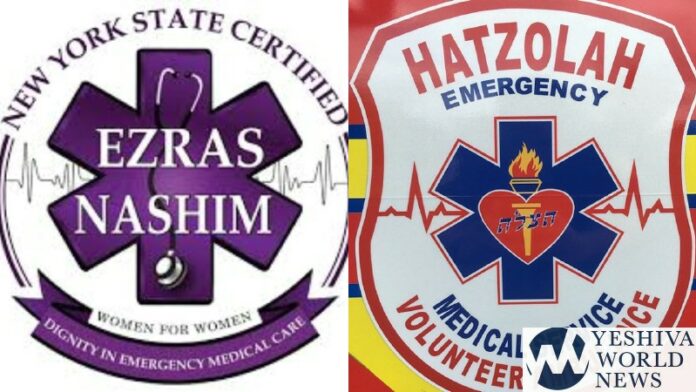 The Chillul Hashem that played out last week in a public forum has shook me to the core. As a member of Chevra Hatzolah, I can’t help but feel the need to stand up for the organization for which I proudly volunteer and defend them for the way they have been portrayed by the liberal media.

Last week there was a public hearing hosted by the Ambulance committee of the NYC Regional EMS Council (NYC REMSCO). The intent of the hearing was to allow the public, as mandated by law, to comment both for and against the request to approve the application for a Certificate of Need for an ambulance to be issued to the organization known as Ezras Nashim. Many of those that attended on behalf of Ezras Nashim as well as the general public that attended, felt that Hatzolah was a misogynistic organization and that they were disrespecting females by not allowing them to join as emergency responders. Ezras Nashim’s argument was that women have a right to choose who should be able to treat them in their times of need.

Before we discuss the need for or against having an organization such as Ezras Nashim I would like to explain the issue from my perspective about having women become responding members of Hatzolah. On the surface, this seems like a great idea. For certain types of sensitive medical emergencies, it would make sense for female responders to treat and transport women to the hospital. For the record I would like to state that Hatzolah has no issues with working with females during the course of emergencies. As is often the case we routinely work with other agencies during the course of an event. As we do not mandate who works with us, whoever shows up to assist us is appreciated regardless of who they are. This can be female EMS personal, police officers and even fire fighters. There are many female doctors in the facilities that we transport both from and to. I have personally transported on a Hatzolah ambulance, on multiple occasions, with female paramedics from other agencies who have always proven to be consummate professionals. Clearly Hatzolah does not consider women as secondary citizens, so what’s the issue with having them join Hatzolah as regular members?

The Vaad HaRabbonim, dating back to the founding of Hatzolah, were all well aware of the concerns and considerations regarding having male Hatzolah members treat female patients. Where there was no choice, due to coverage gaps in times of needs, they actually allowed female members to participate following strict guidelines. Over the years, as coverage became better in those areas that were lacking, those neighborhoods that utilized women gradually stopped doing so. The Vaad HaRabbonim ultimately came to the decision that the tznius issues of men and women working together in various circumstances, at all hours of the day and night, was a bigger issue than men treating women during medical emergencies which though potentially uncomfortable was not wrong according to Halacha. As this is a Halachic decision, and Hatzolah strictly adheres to the decisions of its Vaad HaRabbonim, the decision is not subject to the whims of the operational leadership.

So, what’s wrong with having an organization such as Ezras Nashim? On the surface it seems like a great idea, for women, by women, what could be wrong? Actually, there are many issues but we’ll start with the simple ones. Imagine a child is chas v’shalom choking. The family lives in an area that is on the fringe of Ezras Nashim’s coverage area. The mother of the choking victim grabs the phone to call for help. In her panic she cannot remember the number to call, so she runs to the refrigerator, where she remembers she put up a sticker with Hatzolah’s number. Unbeknownst to her, someone in her house had recently replaced it with an Ezras Nashim sticker picked up at a recent community event, as implausible as this may sound, their stickers look awfully similar to the ones Hatzolah has been giving out for many years, with a very similar phone number on it, and she inadvertently calls Ezras Nashim instead of Hatzolah. Instead of having some of the hundreds of Boro Park or Flatbush Hatzolah members available to respond, you now have two of the twenty or so Ezras Nashim members responding from the heart of Boro Park. Never mind that in addition to the EMTs, Hatzoloh will simultaneously dispatch Paramedics and an ambulance. If you believe that Ezras Nashim would immediately forward the call to Hatzolah or another emergency agency, per the public testimony of some of the medical staffers they are not allowed to do that. As a result, precious time would be lost. Simply understanding the geography and demographics it should be pretty apparent how this organization’s existence and practices puts the community at risk.

What about having them respond only to the more sensitive medical calls such as childbirth and such? The leadership of Ezras Nashim have publicly stated that they intend to become a full-fledged EMS agency, willing and able to handle all calls. In fact, on their website they state, “We service the full spectrum of emergency calls: The motivation behind Ezras Nashim was to respond to Emergency labor and OB/GYN emergencies; however, to serve the needs of the community, we are also responding to pediatric, adolescent and geriatric emergencies.”

OK, so nothing happens overnight, you say. Let’s give them a chance to grow their organization to match the capabilities of Hatzolah and the community’s expectations. First, explain to me the need for a parallel EMS system. Other than the issues already discussed, what will any organization offer that Hatzolah isn’t already providing? As it is, they have set the bar quite high, with statistics that are the envy of EMS systems both nationally and internationally. I say this not out of pride but rather due to actual metrics as reported to government agencies. How many lives need to be put at risk? The founders of Ezras Nashim initially simply wanted to assist other woman in their times of need. With the filing of the Certificate of Need it has become apparent to all that there are those in the organization with their own agenda, to prove that they can be as good as or better than Hatzolah? How many calls, in which seconds may matter, are they going to respond to with an inferior service, likely unbeknownst to the caller, until they can either do a comparable job, or shut down without having reached their goals?

For over 40 years Hatzolah calls have been answered by dialing 718-230-1000. The number chosen by Ezras Nashim seems calculated to look remarkably similar to this number, so much so that I did a double take the first time that I saw their advertising. Barring any other explanation, it would appear that they are intent on misleading the community to believe that they are either working within the framework of Hatzolah or that their organization’s capabilities are similar to Hatzolah when clearly this is not the case.

To be honest, if the Ezras Nashim actually stuck to their mission statement and were able accomplish what they set out to accomplish they would not be any different then any other of the multitudes of Chessed organizations that we are so thankful to have. Last I checked, Chaveriem and Shomrim didn’t sell themselves as a Hatzolah alternative. Neither did any of the multitudes of Bikkur Cholim and support groups that service our communities. Until that occurs, I can only ask that they stop bringing this chillul hashem into the public forum and stop dragging the good name of my organization through the disaster that they have created.

The views expressed in this article are purely those of the author and are not condoned by the leadership of any organization.