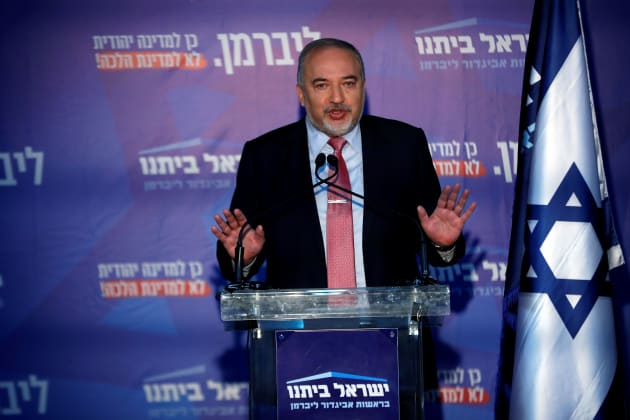 Chairman of the Yisrael Beitenu party MK Avigdor Lieberman on Wednesday refused to endorse a candidate for prime minister, blaming both the contenders engaged in a tense standoff that has paralyzed Israeli politics and pushing the country toward a likely third election in less than a year.

Lieberman’s comments came ahead of a midnight deadline for Prime Minister Benjamin Netanyahu’s rival, Benny Gantz, to form a coalition. Without Lieberman, Gantz appears unable to secure the required majority in parliament to be prime minister.

If Israel is forced into a third election, it would be entering uncharted waters, with opinion polls already predicting a very similar deadlock. But a new campaign could benefit the embattled Netanyahu, who is expected to be indicted on corruption charges in the coming weeks. Netanyahu would be best-positioned to fight any charges from the prime minister’s office.

Lieberman held a press conference at 1:00PM as promised, during which he declared that during the coalition negotiating process with the various parties, he was offered ‘rotation’ but he declined. He emphasized in the press conference, which last about 45 minutes, with questions and answers, that he and his party colleagues did whatever they could to form a liberal national unity coalition government. He attacked the chareidim for being “anti-Zionist” and compared them to extremists like Satmar. He had equally harsh words for Peleg Yerushalmi.

Lieberman explained “they” did everything possible to entice him to join a coalition, including becoming the person who fills in for the PM when he is abroad, as well as rotating into the slot during the last year of the government’s tenure. “Half of the kingdom plus 10%. We are not selling our principles for [cabinet] seats, upholstered as they may be”.

“We will continue fighting for a liberal government coalition”.

Lieberman was careful not to insult Netanyahu or Gantz, placing the blame on both equally.

Some of the main points he made include:
• There must be a separation between religion and state. The chareidim cannot be permitted to continue moving between the two large parties and extorting money.
• There are 150,000 talmidim and avreichim. Limud torah is a welcome endeavor but just as there are 1,500 university students who receive a draft deferment, so it must be with those learning Torah. Do the math.
• I will not become a member of a minority government supported by the Joint Arab List, “which is a fifth column”.
• I will not join a narrow government.
• Blue & White and Likud exchanged accusations but did not make decisions. Both sides are at fault.
• While I respect the president, I do not support his initiative.
• The nation is being held hostage by the Arabs and the chareidim and this is “the true anti-Zionist axis”.
• He mentioned the arrival of the Satmar Rebbe of Williamsburg in Israel this week, “to distribute millions of dollars”, calling on Israel’s Tax Authority to investigate this.
• This is an intolerable situation. I do not see the chareidi parties decrying or condemning the harsh statements made against the state and the IDF soldiers by Satmar.
• The Peleg Yerushalmi is worrisome, and the fact they received two seats in the Jerusalem City Council. The organization actively works against the state, and regularly attacks soldiers; both verbally and physically.

I believe it was possible to reach agreement here. We remain committed to unity. I am most concerned with the ‘cooperation’ seen over the last 24 hours between Tibi and Gafne, but when it comes to votes on matters of religion and state, we see how the two make deals and a book can be written on the handling of the Knesset Finance Committee.

We spoke with the chareidim and it is simply like talking to the wall. We spoke about “a return to normalcy” and making concessions, but no one is listening. But we tried. The same regarding the Draft Bill, and when it was voted on, they deliberately left the Knesset plenum.

There was an understanding in the nation regarding giyur and the chareidim broke it as they violated the status quo with the Shabbos Supermarket Law.

Changes that must be made in the future to ensure governmental stability in the future.
• Changing the law for direct election of the PM.
• The development of a convention between the Zionist parties to redefine religion and state.
• If the PM cannot assemble a coalition in the 30 days allotted, he has the option to form a coalition of “experts” to serve for two years, to permit passing a state budget. This two can be disqualified by 2/3 of the Knesset. This will provide stability and permit the voters to know there is a PM and government for two years.
• Direct election of the PM. This cannot be done for the next election, for it demands serious discussion but the current format has to change.

It appears almost a certainty that MK Benny Gantz will have to return the presidential mandate to President Reuven Rivlin at the end of the day. If this occurs, it begins a 21-day period during which any MK has the right to attempt to form his/her own coalition. If this fails, and most believe it will, the nation will be heading to a third round of Knesset elections in a one-year period.