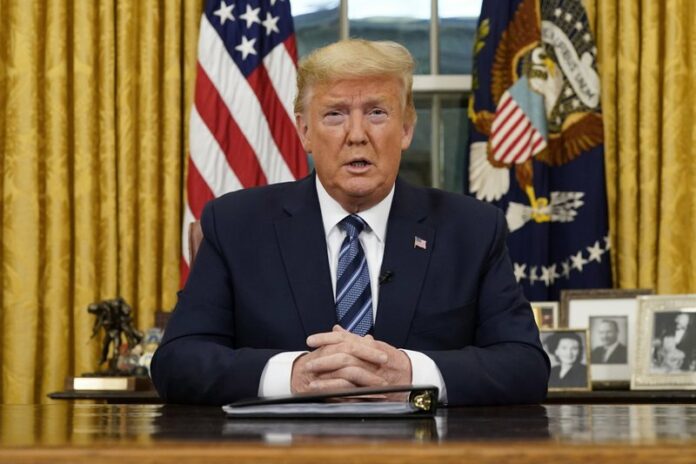 President Donald Trump on Friday declared the coronavirus pandemic a national emergency, as Washington struggles with providing Americans with relief and officials race to slow the spread of the outbreak.

Speaking from the Rose Garden, Trump said, “I am officially declaring a national emergency.” He said it would free up as much as $50 billion for state and local governments to respond to the outbreak. Trump also waived interest on federally held student loans and moved to prop up energy markets, by directing the Department of Energy to buy oil to fill the strategic petroleum reserve “’right up to the top.”

Trump said he was giving Secretary of Health and Human Services Alex Azar emergency authorities to waive federal regulations and laws to give doctors and hospitals “flexibility” in treating patients.

“Through a very collective action and shared sacrifice, national determination, we will overcome the threat of the virus,” Trump said.

He also announced a new public-private partnership to expand coronavirus testing capabilities, as his administration has come under fire for being too slow in making the test available. Trump said, “I don’t take responsibility at all” for the slow roll-out of testing.

The partnership will include drive-thru testing in some locations and an online portal to screen those seeking to get tested.

Trump said the White House and Congress have yet to agree on a broader aid package, claiming that he doesn’t believe House Democrats are “giving enough.” Lawmakers are preparing to vote on their own measure Friday.

Push by reporters on why he hasn’t been tested for coronavirus after coming in contact with someone who tested positive for coronavirus, President Trump said, “I didn’t say I wasn’t going to be tested.”

He followed up that “most likely” he’ll get tested but didn’t say when.

During his speech, Trump was joined by the official coronavirus task force, led by Vice President Pence and leaders of major corporations and businesses, including Target, Walgreens, Quest Diagnostics and CVS Health. Trump said that with federal emergency authorities, the Food and Drug Administration approved a new test of the virus, which would provide “half a million additional tests” that will be available “early next week.”

“Our overriding goal is to stop the spread of this virus and help Americans impacted by this,” he said. “Again, we don’t want everyone to take the test.”

He added: “This will pass…It’s going to pass through…and we’ll be all the stronger for it.”

The president also went on to announce that he would waive interest on federally held student loans and moved to prop up energy markets, by directing the Department of Energy to buy oil to fill the strategic petroleum reserve “‘right up to the top.”

Meanwhile, the president said he would ask hospitals across the nation to activate their “emergency preparedness plans,” and said his designation of a national emergency would allow HHS Secretary Alexander Azar to waive “provisions of applicable laws and regulations” to give medical professionals and hospitals the “flexibility” to care for all patients.

The Trump administration has also partnered with pharmacies and retailers to make drive-through tests available in “critical locations” identified by public health professionals, he said.