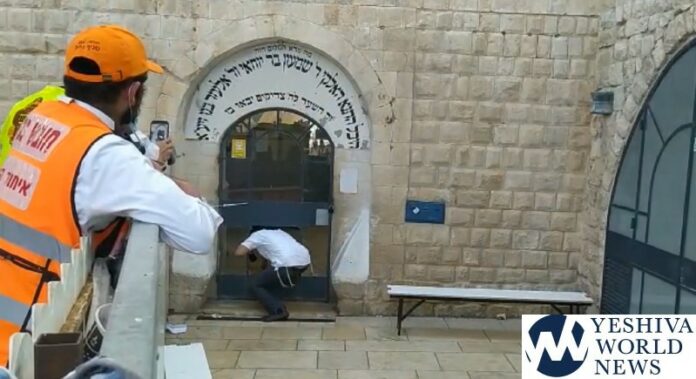 Approximately 300 broke into the Kever of Rashbi on Har Meron on Tuesday evening in order to celebrate the end of Lag Ba’Omer. The group of people, mostly Chareidi men with some children, defied police orders that limited entry to the site due to fears of the spread of the coronavirus. Clashes broke out between those who wished to Daven at the site and security forces who attempted to prevent them from doing so. According to reports in the Israeli media, 300 people were arrested.

Police followed the strict limitations put on the celebration, which normally sees hundreds of thousands of Jews head to Kever Rashbi in Meron over the course of Lag Ba’Omer. However, this year, the Israeli government put a strict limitation on how many attendees would be allowed to visit the Mount.

The break-in took place towards the end of Tuesday after police took down most of their barricades that kept the throngs of would-be worshippers from entering. Violent clashes ensued between the worshipers and police officers, some of whom had left the area and rushed back to the site. Several people suffered mild injuries, according to reports.

Police stated that over one hundred people were arrested for assaulting officers. “Those arrested had attacked officers. They threw rocks at them and forcibly resisted dispersing.” According to reports in the Israeli media, more than 300 were detained.

As most would-be worshippers weren’t allowed to go to the Kever for the holiday, a group of some 200 enterprising Charedim took a flight that was operated by Israir over the town of Meron and the Kever of Rashbi. The reason for the flight was so that the participants could get as close as possible to the tomb. Footage from inside the plane broadcast by Channel 12 news displayed participants blatantly disregarding social distancing rules, gathering near windows, and dancing together.

According to a statement made by United Hatzalah of Israel, 40 people were treated at the Kever for light injuries including fainting, contusions, and abrasions.