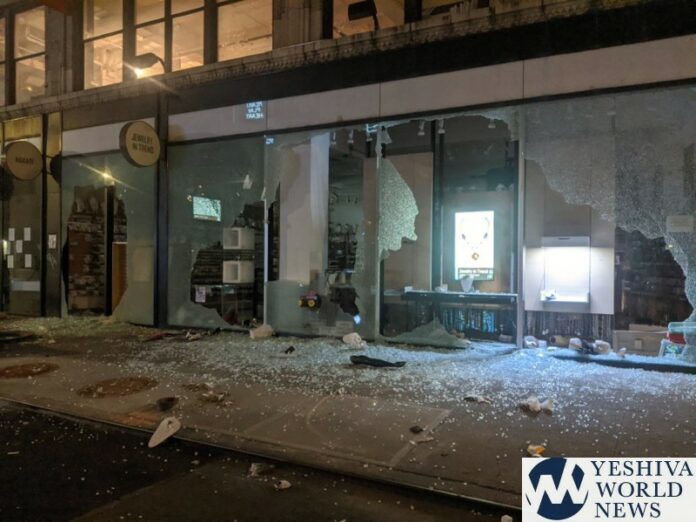 YWN 10:00AM UPDATE FROM NYC: New York City is bracing for its second night of curfew Tuesday, one that will be imposed three hours earlier than Monday’s, after “packs of youth” took to the streets overnight and looted hundreds upon hundreds of stores (a real accurate number – despite DeBlasio saying otherwise) across Manhattan and the Bronx.

Organized looters hit nearly every type of store you could think of, from high-end retailers and big department stores like Macy’s and Bloomingdales, to drug stores and even banks.

Police were posted on nearly every other block in Manhattan but it wasn’t enough to deter looting from Midtown to Lower Manhattan.

Nearly 2,000 people have been arrested over the five days of New York City protests so far. Police confirm to YWN that they cuffed another 700 Monday night, by far the biggest number of arrests in any of the New York protests and nearly doubling the five-day total.

Several more cops were hurt overnight, including an NYPD sergeant investigating break-ins in the Bronx, who was viciously beaten with a wooden object. An officer was struck by a car early Tuesday and is in serious condition. The car was packed with looters who were fleeing police. More than 40 police officers have been hurt since Thursday night.

NY Governor Cuomo has said he has the National Guard on standby but believes the NYPD has the manpower to handle the protests.

[READ WHY: Trash Bins Being Removed From NYC Streets This Morning]

Unfortunately, 98% of the video footage from the looting has extremely strong language and cannot be shown. Here is just a small sample.

Looters being arrested and taken out of the Macy’s in Herald Square. pic.twitter.com/oLDOWhN89Q

This is what the NYPD was dealing with at 8:30. Big groups of looters breaking store fronts in midtown Manhattan. pic.twitter.com/duLNsKsqHf

Looters even tried to get the car inside this store on Madison Avenue in midtown Manhattan. pic.twitter.com/uimkn5Evcg

Hard to describe how rampant the looting was tonight in Midtown Manhattan and how lawless it was. Complete anarchy. Literally hundreds of stores up and down Broadway, Fifth Ave, Sixth Ave. Kids ruling the streets like it was a party. pic.twitter.com/y9Ly1UD1WX