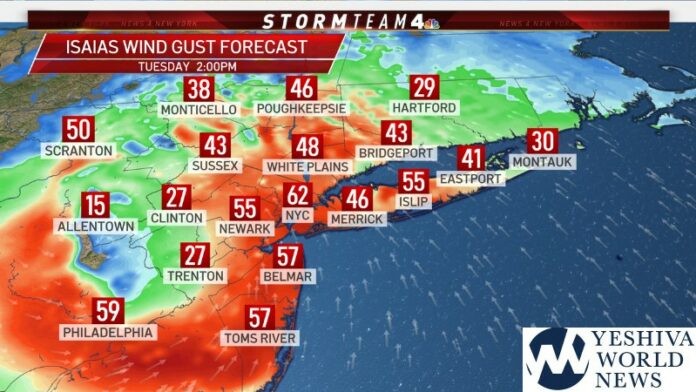 Tropical Storm Isaias is packing dangerous winds and heavy rain as it rapidly heads toward the Tri-State after making landfall as a hurricane near Ocean Isle Beach, North Carolina.

On the forecast track, the center of Isaias will to move near or along the coast of New Jersey by this afternoon.

The primary threat from Isaias will be the torrential rainfall, but we also expect wind gusts up to 50 mph and possible tornadoes.

Tornado watches have been issued for all of New York City, as well as Long Island, Westchester, Rockland, Orange and Putnam counties until 4 p.m. Tuesday. The watch also applies to a number of New Jersey counties and Connecticut’s Fairfield County. The greatest risk of tornadoes is midday from southeast Virginia to New Jersey, forecasters say.

TIMING
1. Showers and thunderstorms throughout the day
3. The heaviest period of rainfall will be between 11:00 AM and 4:00 PM.
4. Rainfall rates are expected to exceed one inch per hour for more than one hour.
5. Tropical storm force winds are forecast to begin this afternoon until 5:00 PM.
6. Sustained winds between 35-45 mph and gusts between 45-55 mph are expected.

AccuWeather says much of the region could get 2 to 4 inches of rain with locally higher amounts.

Make sure to charge up your phones & other devices now, and have a working flashlight on hand! Strong winds from Isaias is expected to cause widespread power outages this afternoon… ⚠️💨⚡️#Isaias #NBC4NY pic.twitter.com/dK2Y5aj7Tp

The tornado threat from Tropical Storm Isaias has increased for portions of the area. SPC has issued an Enhanced Risk of severe weather for parts of the area for a 10% chance of tornadoes. A tornado watch is in effect until 4 PM. #NYwx #NJwx #CTwx #NYCwx #LIwx pic.twitter.com/vtTUYpcU2e

A tornado watch has been issued for parts of Connecticut, New Jersey, New York and Pennsylvania until 4 PM EDT pic.twitter.com/1dqks8kgpT

A tornado watch is in effect for a large portion of the Northeast. Several tornadoes have already been reported this a.m. across Maryland and Delaware. https://t.co/9MWchpaUxu pic.twitter.com/szavr8VKir